The Mesmerizing City of Canals 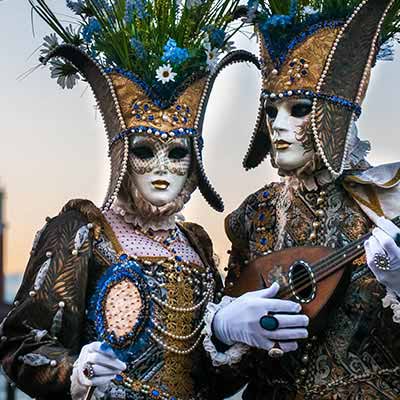 Venice is one of the most well-known cities of Italy, extremely popular amongst honeymoon couples and travelers alike who seek to escape to a quiet, buzzing corner of the world for a couple of days for peace and calm to reflect on their busy daily schedules. Cheap flights to Venice are available on a regular basis because of its popularity and ability to attract visitors, no matter what time of the year it is. Venice is situated across a group of 117 small Islands that are separated by canals and linked by bridges.

Venice is a metropolitan city in Italy which boasts of a population of more than 2 million people. Its patron saint, like the rite of many other European cities, is St. Mark the Evangelist. They celebrate his day on the 25th of April every year. Venice, as a whole, is separated by canals and linked by bridges. These are located in the shallow Venetian Lagoon, an enclosed bay which lies between the mouths of the Po and the Piave Rivers. These rivers occupy a very significant place in the culture and history of Venice. Parts of Venice are also extremely renowned for its beauty, its picturesque settings, stellar architecture and classic artworks. The lagoon and the majority part of the city are listed as a World Heritage Site. Flights to Venice are a great idea no matter who you are travelling with. It is also a superb option for solo trips where you can indulge in a bit of soul searching.

The name of the city of Venice is derived, supposedly, from the ancient Veneti people who inhabited the region during the 10th Century BC. The city was historically known as the capital of the Republic of Venice. It has also been known by a variety of names over the years such as La Dominate, City of water, City of masks, City of Bridges, Queen of the Adriatic, The Floating city and the City of canals which is perhaps the most apt of them all. Venice has its own charm with its rustic alleyways which scream of old world charm. It is very difficult not to be impressed with the way it functions every day.

The city of Venice is also known for several important artistic movements, especially the Renaissance period which gave rise to one of the most famous periods of all time, which witnessed the rise of a cult of artists who changed the art scene of the world with their work. After the Napoleonic Wars and the Congress of Vienna, the Republic was annexed by the Austrian Empire until it became part of the Kingdom of Italy in 1866, following a referendum held as a result of the Third Italian War of Independence. Venice has almost always played a very important role in the history of symphonic and operatic music and is the birthplace of Antonio Vivaldi.

From the 9th to the 12th Century, Venice started to gradually develop as a city state. Its strategic position at the head of the Adriatic made Venetian naval and commercial power almost invulnerable. The city became a flourishing trade center between Western Europe and the rest of the world with a naval power protecting sea routes from potential invaders. Although, the people of Venice are largely orthodox Roman Catholics, the State is well known for its freedom from any kind of religious fanaticism and holds the record of no executions during the Counter Reformation. The city has a very unique style of buildings which are found nowhere else in the world.

They are built on closely spaced wooden piles. Most of these piles have still remained intact after centuries of submersion. The foundations rest on plates of Istrian limestone placed on top of the piles and the buildings that are made of brick or stone, they are made to sit atop the limestone footings. What the piles do is, they make sure that they penetrate a softer layer of sand and mud until they reach a much harder layer of compressed clay.

A couple of more facts about Venice are as follows

Venice has a humid, subtropical climate throughout the whole year with cool winters and very warm summers. The temperatures in January dip to around 3-4 degree Celsius and in July it rises to about 23 degrees Celsius. For people from the Tropics, this weather is extremely agreeable if not their absolute favorite. Rainfall is also spread evenly throughout the year and averages 748 millimeters. This goes a long way in showing that there is a definite reason why cheap airline tickets to Venice are available the whole year round.

Venice has a number of places that you can visit including the St. Mark’s Square which is also known as the “drawing room of Europe”. The Piazza was for very long, the symbolic heart of Venice. These days, it is a bit overcrowded with the likes of tourists and locals alike, it is still as magnificent as ever and it could take days to fully explore all the sights like the Basilica San Marco, the Doge’s Palace, the bell tower, the clock tower, the Correr Museum and more.

Fees to these places may vary and will be easily available when you visit. The Gondola Tours are also a speciality as you will experience looking at Venice the way it was mean to be seen, from the waters. You could possibly try the lesser crowded spots like San Toma. The Accademia Gallery also houses numerous works by Venetian Masters from the 14th to the 18th century with works from Bellini, Tintoretto and Titian.

However, it is imperative to mention that entry to the Quadreria is by advance reservation only. The Rialto markets are also a must visit site with the famous 16th century bridge and open air fish and produce markets. You can also visit the Ca’ Rezzonio, the aristrocatic mansion on the Grand Canal where Robert Browning died in 1989. It is now a museum featuring 18th century art work and offers a peak into the lifestyles of the past. All of these reasons are definitely worth flight deals to Venice!

When is the best time to book a flight ticket to Venice?

The best time to book a flight ticket to Venice is almost the whole year round because that is what the truth is. Tourists flock to the city regardless of which month of the year it is. But it is imperative to mention that all kinds of last minute flights to Venice are available during January and July.

Since, Venice is an extremely popular tourist site, a number of major International airlines travel to and from the place every day like the Lufthansa, British Airways, KLM flights, Qatar Airways etc. All of them provide low cost flights to Venice.

Other popular places to visit

A couple of popular events in Venice are the Redeemer Festival, The Ragata Storica, The Saint Mark Festival, the Salute festival, the Venice Carnival and the Venice Air Expo. Visit, Venice at least once in your life, you will not regret it.