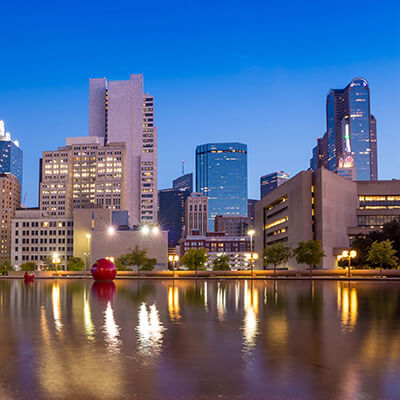 Affluent arts scene, opulent culture and scenic sites are some of the features of Dallas in the state of Texas.

With Lookupfare you can easily find cheap flights to Dallas. Just get an idea about the various Dallas Flight Deals and see how we can help you grab the best deal in flights. Also find some amazing offers on last minute flights.

Dallas is a modern metropolis and is dubbed as the cultural and commercial hub of North Texas. In 2013, it was ranked as a "beta plus" city by the Globalization and World Cities Study Group & Network. It is also the largest economic center of Dallas - Fort Worth -Arlington metropolitan area.

Dallas Arboretum & Botanical Gardens - Spanning across 66 acres, this beautiful garden features some spectacular floral displays year round. In 2015, the Dallas Arboretum was ranked amongst the best spring flower festivals of America by Fodor's Travel. Just book your cheap plane tickets to Dallas and savor some of the most breathtaking views in the Dallas Arboretum.

Dallas World Aquarium - This incredible facility houses number of exotic species of fauna such as birds, toucans, two-toed & three-toed sloths etc. It is home to number of endangered species as well like Orinoco crocodiles, Antillean manatees Giant river otters and various species of monkeys as part of conservation projects.

Reunion Tower - This iconic landmark offers the guests some unmatched views of Dallas via high-definition zoom cameras along with an interactive digital-touch screen display, referred to as the Halo, which allows the guests to see and engage with the city in many new ways.

Find the best low-cost flights to Dallas with Lookupfare and make your trip to 'The Big D'ÂĂ?Âť unforgettable. Check out our numerous special deals and offers and find cheap domestic flights and cheap airline tickets to Dallas.