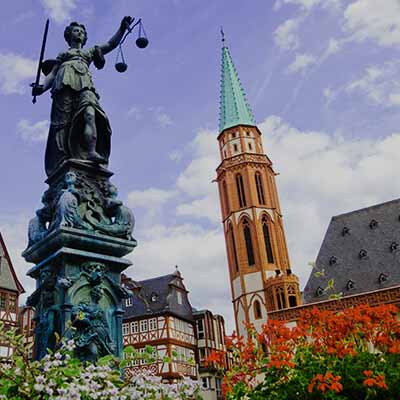 A concrete jungle where old and modern architecture blends-in beautifully to create its own unique charm, Frankfurt, is one of the places which needs to be included in your ‘to explore’ list. The city is known for its bustling nightlife with many bars entertaining their clientele with live music- jazz in particular. Hop on a cheap flight to Frankfurt, drop-in at one of the bars for a few drinks and unwind after a day of sight-seeing.

Naturmuseum Senckenberg- A favorite among kids, it is the second largest museum of natural history in the country. The chief attractions of the museum are all the dinosaur fossils showcased in its exhibits. One of the fossils which fascinate visitors the most is that of a dinosaur with a preserved scaled skin. The museum is famous for being the biggest exhibit of large dinosaurs in Europe.

Romer- One of the city’s most important landmarks, this medieval building is located at Altstadt. It is used as a city hall.

Stadel Museum- An art museum consisting of one of the most important collections in the country, it also houses a library with around 100,000 books. They have around 2,700 paintings, 100,000 drawings & prints and 600 sculptures on display.

Palmengarten- Located in the Westend-Sud district, it’s a lush botanical garden spanning over an area of 22 hectares.

Frankfurt Cathedral- Situated in the centre of the city, it is a Roman Catholic Gothic Church dedicated to Saint Bartholomew.

Travel portals found online have made it very convenient for you to find cheap airline tickets to Frankfurt. These low cost flights are usually a part of a travel package which you can purchase along with accommodation. If you prefer to purchase the cheap plane tickets without any accommodation, you have the option to do so. Purchasing a travel package would help you to acquire the kind of tickets best suited to your travel needs. Some of these travel packages are senior travel deals, group travel offers, Military travel offers and one way flight deals. Go through the Lookupfare website and app to find all the Frankfurt flight deals they have on offer.