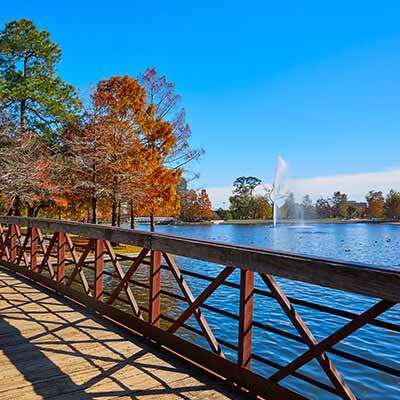 Houston is considered as a major American metropolis and is the largest city in the Southern United States. Lush greenery, stunning architecture, and diverse history are some of the major attractions of Houston in the state of Texas.

Houston is nicknamed as 'Space City' and is a global city with major strengths in business, international, entertainment, culture, media, fashion, medicine, research, technology, sports, and trade. Not only this, the city is famous for its various forms of art, theaters, parks and recreations, infrastructure and much more. Founded on August 28, 1836, and incorporated as a city on June 5, 1837, Houston city is known widely for its fourth-tallest skyline in North America after New York City, Chicago, and Toronto. Also, a seven-mile system of tunnels and skywalks links many buildings, shops and restaurants.

The Houston Museum of Natural Science: This remarkable science museum boasts of an excellent collection of dinosaur skeletons, mineral specimens, a planetarium, an IMAX theater space-station models and a six-story butterfly center. The museum was established in 1909 with a goal to provide an independent institution for the people of Houston focusing on education and science. Some of the permanent exhibits include the Foucault pendulum, Cullen Hall of Gems and Minerals, Farish Hall of Texas Wildlife, Strake Hall of Malacology, Earth forum and much more.

Houston Zoo: This one is a must visit site for all wildlife adorers. The zoo houses near about 6,000 species of variety fauna and receives more than 2.25 million visitors each year. Not only this, but the city's zoo is also known for supporting more than a dozen conservation projects in Texas and across the globe.

Children's Museum of Houston: This is one of the most preferred spots for children. This museum consist of numerous hands-on interactive exhibits from the fields of science and technology, health and human development, history and culture and the arts.

The Menil Collection: This amazing art facility comprises of many collections of some of the most surrealist works by artists like Salvador Dali and Max Ernst. A total collection of around 17,000 objects including various paintings, sculptures, photographs and other things are found in the Menil Collection, located in Houston, Texas, USA.

Houston experiences a humid subtropical climate. It's warmer during summers and pleasant during spring and fall. The best time to visit Houston is from February to April and from September to November. The temperature remains mild and cold during these months.

Also, the city experiences cold climate and occasional snowfall during winters. So, make sure you do not forget to book cheap flights to Houston during winters and pack some warm clothes.

The William P. Hobby Airport is the nearest major airport. The airport caters to domestic flights and is 14 miles away from the center of Houston, Texas. Another primary airport is George Bush Intercontinental Airport which is 21 miles far from Houston, Texas and holds both domestic and international flights.

Find some of the best domestic airline tickets and low-cost flights to Houston with Lookupfare and make your trip to the Space City unforgettable.