The Gambling Capital of the World 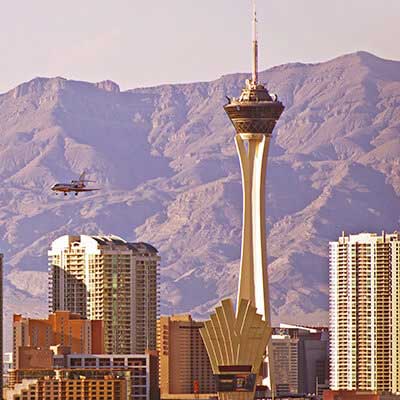 Las Vegas, the most populous city in the US state of Nevada, is a favorite among vacationers. Famous for its vibrant nightlife, casinos, shopping and fine-dining, the city attracts a large number of domestic and international tourists. It is known as The Entertainment Capital of the World. Grab a cheap flight to Las Vegas and visit one of its nightclubs or entertainment venues for an unforgettable time.

If you want to take a break from all the casino fun, the city is perfect for adventure sports. Its terrain and climate provides the perfect opportunity for adventure lovers to engage in exhilarating activities such as parasailing, sky-diving, scuba-diving and rock-climbing.

Caesars Palace- Located on the Western side of the Las Vegas Strip, it is a luxury hotel and casino. Inaugurated in 1966, it is a well-known landmark. The hotel was built with a Roman-Empire theme and consists of around 3976 rooms including plush suites.

Red Rock Canyon National Conservation Area- It is a protected National Conservation Area featuring huge red-rock formations and a set of sandstone peaks and walls called the Keystone Thrust. Hop on a cheap domestic flights to Las Vegas and spend a day walking through the trails along the park. Its rugged terrain has made it a popular destination among trekkers and rock-climbers.

MGM Grand Las Vegas- Inaugurated in 1993, it has around 5044 rooms, five outdoor pools, a spa with world-class amenities, shops, restaurants and nightclubs. It also houses the largest casino in Clark County.

Shark Reef at Mandalay Bay- Situated at Mandalay Bay Resort and Casino, it is one of the largest public aquariums in North America. Its main tank is of around 1,300,000 gallons. The aquarium is home to a number of species such as Komodo Dragon, Burmese Python, Green Sea Turtles, Green Tree Monitors and sharks. Its various exhibits are the Shipwreck, Jungle and Touch Pool.

Adventure Dome- It is an indoor amusement park located at Circus Circus. Spanning over an area of 5 acres, it has many exciting rides including the world's largest indoor double-loop double- corkscrew roller coaster. Catch a last minute flight to Las Vegas and spend a fun day at this family-family wonderland. Its chief attractions are Canyon Blaster, El Loco, Chaos, Lazer Blast and Frog Hopper.

When you search for cheap airline tickets to Las Vegas, you'll be amazed to see how easy it is to find them online. Travel portals such as Lookupfare have made it incredibly convenient for you to find the kind of travel packages you're looking for. Be it for one way, round trip or last minute flight deals, our website and app is at your service 24x7 and helps you to acquire low cost flights to Las Vegas with just a few clicks.