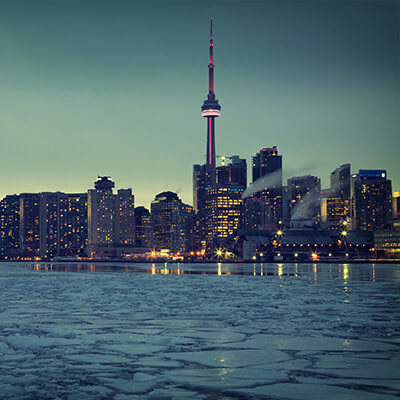 Soaring skyscrapers, lush greenery and abundant sports facilities are the primary features defining Toronto in the Canadian province of Ontario.

With Lookupfare you can easily find cheap flights to Toronto. Just get an idea about the various Toronto flight deals and see how we can help you grab the best deal in flights. Also find some amazing offers on last minute flights.

Toronto is the most populous city of Canada. Ranked a global city, it is a global center of finance, business, culture and arts. The metropolis is widely acknowledged amongst the most cosmopolitan and multicultural cities in the world. The city is also a prominent center for theater, music, television production and motion picture production.

Niagara Falls - Three spectacular falls, one Canadian and two American, mark the point where the Niagara River rumbles over the Niagara Escarpment. All you need to do is just book your cheap airline tickets to Toronto and savor one of the most splendid wonders of nature on earth.

Toronto Island Park – This beautiful park consists of four main islands and beaches, containing trails and children's amusement rides. A trip to Toronto is never said to be complete without a visit to this magnificent site.

CN Tower – Dubbed as a national icon, an engineering wonder and an award winning entertainment and dining destination, this architectural building is one of the must-see attractions of the city.

Royal Ontario Museum – It is amongst the leading museums on the planet of world cultures and natural history. It offers an unmatched experience of the intertwining of humanity and nature through a diverse array of exhibits.

The AGO, Art Gallery of Ontario – It is the eighth-largest art museum in North America and boasts of an awe-inspiring collection with over 36,000 works representing more than 1,000 years of extraordinary art.

Find the best low-cost flights to Toronto with Lookupfare and make your trip to the Queen City memorable. Check out our numerous special deals and offers and find cheap plane tickets to Toronto.