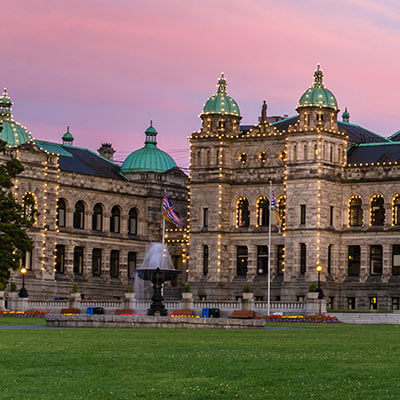 Exciting outdoor activities, Victorian architecture and beautiful gardens are some of the primary features defining the capital city of British Columbia, Victoria.

Located on the southern tip of Vancouver Island, Victoria is ranked amongst the top 20 cities in the world for quality of life. Victoria is a very popular tourist destination with a flourishing technology sector that has resulted to be its largest revenue generating private industry.

Royal BC Museum – Built in 1886, this museum has preserved and shared the human and natural histories of British Columbia. The museum also houses a cultural precinct such as the BC Archives, St. Ann's Schoolhouse, Helmcken House etc.

Inner Harbour – This scenic waterfront is the center of the city’s many tourist attractions, restaurants, shopping and recreational activities. Due to such wide range of activities, it has often been dubbed as a “Hive of Activity”.

British Columbia Parliament Buildings - Home to the Legislative Assembly of the state, these buildings are open for the public throughout the year. The visitors can even have a bite in the Legislative Dining Room.

Craigdarroch Castle – Built in 1980, Craigdarroch is a stately home constructed by the pioneering couple Joan and Robert Dunsmuir, who at the time of its creation were the richest people in British Columbia.

Lookupfare has formulated some of the most incredible deals which will let help you clutch the best low-cost flights to Victoria. Take a look at our numerous offers and book the best cheap plane tickets to Victoria alongside number of special offers such as student travel deals, senior travel deals, family travel deals etc.