Last updated on Sunday 12/05/2021 at 05:00 AM, the fares mentioned below are for Round Trip flight tickets and inclusive of fuel surcharges, service fee and taxes. Based on historical data, these fares are subject to change without prior notice and cannot be guaranteed at the time of booking. Kindly go through our terms and conditions before booking. 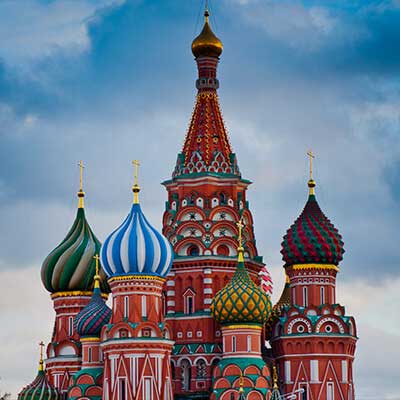 Moscow - a capital city where it feels like time has literally stood still. We say so because the architecture essays the story of the bygone times of Russia so beautifully. The rustic romance of Russia stands evident at every turn of the boulevard and you cannot help but fall in love with its magnificence.

The art galleries and museums strike the right chords and appease the aesthetic senses of the onlooker. You will be amazed to see numerous marvelous works by eminent artists. Art extends itself to broader platforms such as theatrical stages. Various venues around the city present great evenings of ballet and opera. Being audience to some spectacular acts is bound to leave you awestruck. The city is promising in every bit. Book cheap flights to Moscow and let the good times unfold.

A cultural capital, Moscow is an ace in every respect. The culinary experience in the city is class apart. From authentic dishes to new take on old school cooking, the rich flavors of Russia will please your taste buds. When the shopper in you awakens, you will be spoilt for choice completely. Right from high end chic boutiques to handicraft markets, you will wish for more money in your account. When the city does it all, we suggest you hop-on a last minute flight to Moscow because this dream destination never seizes to surprise.

Red Square - The heart of Moscow will sync its beats with yours. The Red Square will win you over at first glance. What once served as a market square, today stands as a symbol of great architectural spectacle. Move your eyes in any direction and treat yourself to the sight of some of the best architectural stunners. A significant spot where much of the Russian history unfurled itself, this place will evoke awe in every person.

Lenin's Mausoleum - The museum has always aroused curiosity in everyone ever since its inception in 1930. It is the very place where the embalmed body of Vladmir Lenin is kept on display. More than a century has elapsed but the craze to see this place has not subsided. People still wait in long queues to take a glimpse of the body of Lenin housed in this illustrious building. Interesting, right?!

Kremlin - A site of supreme power and religious beliefs, Kremlin will sweep you off your feet with its sheer grandiosity. Stepping inside Kremlin means you will get to know the character of Russia in its entirety. Museums, cathedrals and palaces, everything demands your time and attention in this ancient fortress. The profoundness of Russia and how the country has been shaped to this day will become clear to you once you visit Kremlin. Rent a car and head straight to this imposing building to maximize your knowledge about the country.

Saint Basil's Cathedral - A picture with Saint Basil’s Cathedral as a backdrop is enough to up your game on social media. The splash of colors and intricate carvings on the cathedral will leave you spellbound. This legendary building has always been synonymous to Moscow and you will know once you explore this masterpiece. Book flights to Moscow and make sure that you visit this architectural gem.

Gorky Park - Adding aesthetic beauty to the already splendid looking city, Gorky Park has long been a recreational spot for locals. Gracing Moscow since 1928, it is an urban oasis of nature where tranquility literally sings lullaby. The vistas of Moscow River from the park are commendably picturesque. It wouldn’t be wrong to say it is one of the perfect places to watch a sunset in the city. Kids too love this place for the rides installed in the park and the vast expanse of playground and bicycling tracks. Also, a picnic with the family shall suffice for some quality time with them and make it all the more memorable. There are many hotels lining the area around the park. So, make sure you get hotel bookings done well-in-advance to save big.

Bolshoi Theatre - Moscow is a city where art comes alive in every form. And, a step in to the Bolshoi Theatre is a testament to this fact. Packed with opera and ballet performances round the year, you can easily catch a show when you’re in the city. Thus, do not miss a chance to witness some staggering performances that are bound to leave an ever lasting impression on you. It wouldn’t be a matter of surprise if you return home as an opera or ballet fan.

Moscow is a city that grows on you slowly. It caters to different tastes and interests. Art aficionados, nature lovers, shopaholics, party goers, culture enthusiasts— all are in for a good time. When a city is so enticing, how could you escape its charm? Scroll through our website and lock down on the best suited deals of your choice. Beginning from deals under $99 to group travel deals, we have it all. So, delay no further.