A Cosmopolitan with a Glorious Past 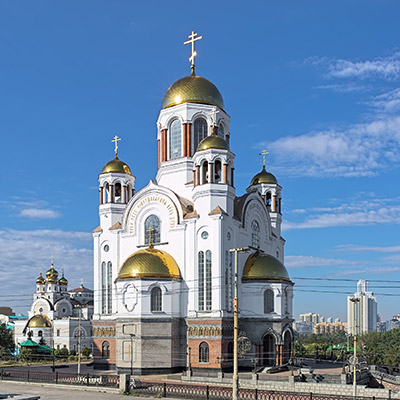 The scenic city of Yekaterinburg captivates explorers from all across the globe who are excited to discover spectacular architecture, fascinating music scene, rich industrial heritage, insightful museums, lively art scene, exceptional performing arts, fascinating history and great outdoor pursuits. Hop-on a last minute flight to Yekaterinburg and let the city charm you in its own ways.

Yekaterinburg is a promised land for architectural admirers. The city nestles within itself more than 600 historical and cultural monuments, hundreds of years old wooden and stone buildings, some exquisite works of constructivist architecture along with a host of towering skyscrapers. Rent a car and steer straight to Vysotsky, the tallest multifunctional business center in Ural-Siberia to take-in some breathtaking views of the city from the 649 feet high observation deck.

The beautiful city boasts an unparalleled musical legacy. It is home to the Beatles Monument, perhaps the most iconic attraction in the city. The English band served as an inspiration for many rock bands. Treat yourself to some soul-stirring tunes at the Ural Music Night festival, groove to some funky beats at the Dom Pechati or relish a pint or two with some classic jazz melodies at the EverJazz club.

History and art buffs will take much delight in booking airline tickets to Yekaterinburg, thanks to its 60 museums and art galleries. A few of the hotspots include the Ural Mineralogy Museum, The United Museum of Ural Writers and Museum of Fine Arts among others.

The Church on the Blood - Also referred to as the Church of All Saints, this fine looking Russian Orthodox Church is built on the land of the former Ipatiev House. This is the place where Tsar Nicholas II, his family and the Romanovs were kept and later killed post the February Revolution. The house was destroyed and a church was erected on its site in the 1990s, in the commemoration of the last tsar of Russia and his family. The site features two chapels and an onsite museum narrating the tales of the fateful days.

Kirillov House - Get onboard a low-cost flight to Yekaterinburg and head to this beautiful home that seems to have been plucked out of a fairytale book. Having its fair share of whimsical folklore, the house was intricately constructed and designed by a local blacksmith called Kirillov. Spending nearly a decade and a half in building his dream home, the artist put many interesting elements for visitors to appreciate. The house is regarded as one of the most magnificent sites in the city to witness.

Plotinka - During the initial years of the 1700s, Plotinka merely served as a dam to the River Iset. Today, it is one of the city’s most popular green spaces that take visitors back in time to the burgeoning days of Yekaterinburg. It makes for an ideal spot to hangout and unwind amidst lush greenery. Visitors can often be seen taking a stroll, picnicking and stretching their muscles. The site offers both paved and grassy areas and features a host of monuments and statues. The complex is also home to a number of museums such as the Architecture Museum and Fine Arts Museum. The Stone Park is a particular highlight of the area.

Victory Park - Located not too far from the city center is a tranquil green oasis called Victory Park. Offering the perfect escapade from the hustle and bustle of the metropolis, one may find a large number of gazebos available for hire throughout the area. Visitors may hire them for picnicking, barbecuing or to simply relax in serenity. You may go for horseback riding, bike riding or simply take a stroll. The site also features trampolines and paint ball facilities for the little ones. On the premises of the park is a café offering an enticing selection of some authentic Russian delicacies. Due to its central location, you may easily find a number of hotels in Yekaterinburg within the proximity of the park.

Keyboard Monument - Tech enthusiasts are in for some visual treat at this remarkable outdoor sculpture. Crafted by an artist named Anatoly Vyatkin in the year 2005, this art piece was created to honor technology and computers. The monument features about 86 stone blocks, with each of them ranging between 100 to 1000 pounds in weight. All the blocks are laid down in a pattern to resemble a gigantic QWERTY keyboard. Designed in a ratio of 30:1, the entire sculpture measures over 50 feet. As per a local legend, one who wishes to restart and turnaround his/her life may step on the CTRL, ALT and DEL keys.

So now that you’ve made up your mind about booking flight tickets to Yekaterinburg, check out our wide array of offers on flights, hotels and cars. Whether you’re booking for the next day or months ahead, you can rest assured that you’ll find the best cheap flights to Yekaterinburg on our website.