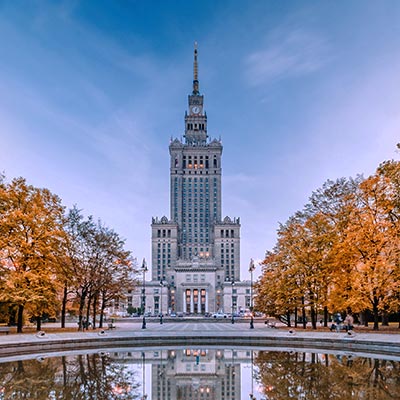 Warsaw has had a painful history. It reeked of tragedies and atrocities in the past and was completely obliterated during World War II. Therefore, not many people actually view it as a city suited for vacation even to this day. That’s a folly they commit. Because, the city has sprang to life and how?! It went through a series of revival over the years to shape up its present. And what a magnificent comeback story it has written! The rundown buildings stand strong befriending the modern skyscrapers. The lovely green spaces are perfect for people to take a leisurely stroll, breathe in the fresh air or relax in the lap of nature. The many museums add a strong character to the city with so much to see and learn about Warsaw. And art is on the rise with several art galleries doing their bit in displaying the best of paintings and sculptures. So, book a flight to Warsaw and have an amazing vacation in the capital of Poland.

Travelers are usually too engrossed in the attractions to pay attention to the neighborhoods. That’s where they go wrong. Truth be told, a neighborhood is where you can experience the realness of a city. And, Praga is that very neighborhood in Warsaw that you mustn’t miss or else you shall be home bound with half-baked experiences. Sitting pretty on the other side of Vistula River, Praga feels like a whole new city. The neighborhood brims with cute cozy cafés, quaint little bookshops, pubs pulsating with electrifying energy and streets full of vibrant graffiti. So, book cheap flight tickets to the Polish capital and have fun.

Palace of Culture and Science

Rising to a height of about 778 feet, Palace of Culture and Science is an architectural marvel decking up the city. This monumental building took about three years straight to be constructed. Opened in 1955, the building was a gift by Stalin’s to the Poles. Since then, the building has become synonymous to the identity of Warsaw. The building is home to theatres, bookshops and museums promising a good time to visitors. The sky piercing building, which is labelled as the tallest building in Poland, has an observation deck at the 30th floor from where visitors can get a bird’s eye view of the city.

Warsaw suffered profoundly at the hands of Nazis for the longest of time. The oppression of the Polish, therefore, resulted in the historically significant Warsaw Uprising of 1944. Though the uprising was a failure, just the fact that the Poles tried their best to oust the German Army was a feat on its own. Thus, to commemorate the efforts, Warsaw Rising Museum was born in 2004. The museum is the best place to learn every tiny detail there is to the uprising. Packed with interactive displays, videos, photographs, and various exhibits, the museum is intriguing to say the least.  Spread across several levels, the museum narrates the story of the uprising in a chronological order. Rent a car and head to Warsaw Rising Museum for getting an insight about the history of the city.

Old Town is the crowning jewel of Warsaw. The winding cobblestone streets, the colorful tenement houses and a vibrant atmosphere encapsulates the charm of Old Town. It is a window to the “once upon a time” in Warsaw when the city was riding high on its golden days. However, the historic center which was reflective of the 12th and 13th century was almost burnt down to ashes during the Warsaw Uprising of 1944. Later, with the efforts of the government and the locals, Old Town was restored to its former glory with such precision that it’s hard to tell if it was ever ripped apart. Today, it enjoys the status of being a UNESCO World Heritage Site. The Old Town Market Square nestled in the Old Town is where all the fun things go down. Several restaurants, cafés and bars dish out good times to visitors. Many hotels are located in this majestic area. So, make hotel reservations to wake up to the lively vibe of the Old Town.

The Polish people have a thing for their flavorsome authentic food. You’d be quick to realize their fascination once you nosh on the traditional dishes. For this very reason supposedly, the locals have stuck to the classic dishes and not experimented much with their taste buds. But, with the onset of global exchange, chefs are giving a twist to the classics which are becoming a huge hit not only with the travelers but also with the locals. So, you’re in for a great time dining in the city. Hop on a last minute flight to Warsaw and eat to your heart’s content.