Chill in a Fun & Peppy City 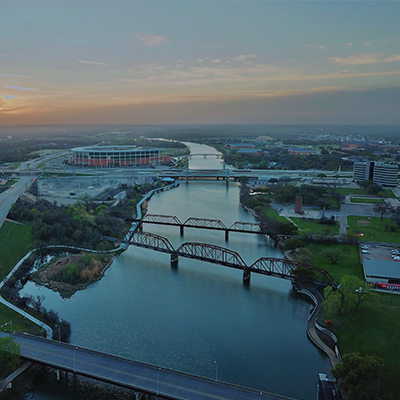 Nestled in the heart of Texas, Waco is a fun place to visit. The city welcomes tourists all through the year.  With countless shops and restaurants galore, Waco entertains one and all.  Bright and sunny summers combined with pleasantly mild winters allow locals and tourists to explore the history of Texas and the diverse cultural collection of Waco. Book flights to Waco to visit a city that is full of life and hosts extravagant travel and craft events and a number of theatrical performances and musical shows.

Waco is situated along the Brazos River and I-35, halfway between Dallas and Austin. The city is the county seat of McLennan County, Texas.  During the 18th century, the Wichita Indian tribe also known as "Waco" inhabited the city. In 2010, according to the US population census, Waco was declared as the 22nd most populous city in the United States of America and since then the population has only shot up. Waco is the birthplace of Dr. Pepper. The city is home to the Texas Sports Hall of Fame and Texas Ranger Hall of Fame and Museum. It also boasts of housing the biggest Municipal Park in Texas – Cameron Park that attracts a lot of tourists.

Magnolia Market at the Silos - A market area that is flooded with a bustling crowd each day, rose to fame post the popularity of the show ‘Fixer Upper’ featuring the famous Chip and Joanna Gaines. This place has become a popular stopover place not only for the various shops but mainly because it has an area for kids to play and houses many eateries that keep all age groups engaged and interested.

Cameron Park - A park spread out on a massive area of 416 acres has got its name after the lumber baron and philanthropist William Cameron. With a stretch of about 15 miles for hiking and biking, this park organizes a lot of races and activities. The Cameron Park also houses a 23-hole golf course with a separate 18-hole golf course that offers boat launch and horseshoe pits around Brazos Park East. Book cheap flights to Waco to explore a park spread over hundreds of acres.

Waco Suspension Bridge - Badged as the city’s most classic feature, this bridge stands at a height of 475 feet crossing the Brazos River. The bridge opened to use in 1870 and served as the crossing ground for the wagons and cattle over the ferocious Brazos River without any mishap. Later on, it was also used as a crossover medium for cars and trucks but the State Historical Committee decided that the bridge should be accessed only on foot. However, it often serves as the finish line for races and marathons.

Waco Mammoth National Monument - This museum is home to 24 fossils of Columbian Mammoths and other mammals from the Pleistocene epoch. These fossils have been claimed to be discovered in this museum and paleontological site. Spread on an area of 5 acres, people visiting the museum can see the in situ remains of the six Columbian mammoths and a handful other animals of the Ice Age. It is the 408th unit of the National Park Services and 16th unit in Texas.

Clifton - This place was inhabited by the Norwegian immigrants around the 19th century, hence it has been officially entitled as the Norwegian Capital of Texas. This place celebrates its Norwegian heritage on the first Saturday of December through a carnival Christmas tour. This city is popularly known for its exuberant art community with talented artists exhibiting some exceptional artwork. For the same reason, Clifton has been named as one of the top 100 small art communities in the country. The downtown area showcases some of the brilliant murals covering the walls of the Art Alley.

Texas Ranger Hall of Fame and Museum - This is the state-designated official historical center of the famed Texas Rangers law enforcement agency. It houses the famous Homer Garrison Jr. Gallery that has on display more than 14,000 artifacts that recall the history of the founding of the Texas Rangers. The Texas Ranger Research Center in the museum is used by the researchers to produce television shows and movies and to write books. The collectibles include personal and case files of the Texas Rangers.

Visit Lookupfare to book round trip deals and last minute flights to Waco to experience a fun filled city with many popular attractions to see.