The City of Music 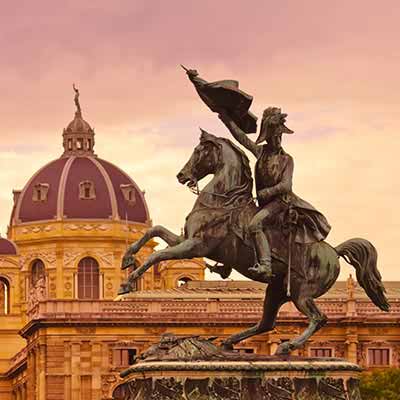 Artistic legacy, intellectual heritage, and imperial palaces are the primary features of the capital city of Austria, Vienna.

Located on the eastern side of the country, Vienna is the capital and the largest city of Austria. Dubbed as Austria’s primary city, it has an approximate population of 1.8 million residents, making it the 7th most populous city within the city limits in the European Union. One of the nine states of Austria, Vienna is considered the political, economic and cultural center of the country.

Until the early 20th century, Vienna used to be the largest German – speaking city in the world and prior to the separation of Austro-Hungarian Empire in World War I, the city consisted of 2 million residents. Today, it is the second-largest German-speaking city in the world after Berlin. Vienna is home to many International organizations including the OPEC and United Nations.

Due to its affluent musical legacy, Vienna is referred to as “The City of Music.” At the same time, it is also regarded as “The City of Dreams,” as it was home to Sigmund Freud, the first psycho-analyst of the world. The roots of the city lie in early Roman and Celtic settlements that blossomed into a Baroque and Medieval City. Later, it also went to become the capital of Austro-Hungarian Empire. It is also acknowledged for the crucial role it played as a leading European music center from the iconic times of Viennese Classicism through the early 20th century. The historic center of the city boasts of rich architectural ensembles, including Baroque castles and gardens.

Vienna is recognized for its high quality of life. In a study conducted in 2005 comprising of 127 world cities, Vienna topped the list of world’s most livable cities alongside San Francisco and Vancouver. Between 2011 and 2015, Vienna was placed second after Melbourne, Australia. Between 2009 and 2016, a human –resource consulting firm ranked Vienna first in its annual survey of “Quality of Living” for consecutively eight years, and the list consisted of hundreds of cities around the world. The UN-Habitat also ranked Vienna as the most prosperous city in the world in 2012-2013.

St. Stephen's Cathedral – Also referred to as Stephansdom, this cathedral begun modestly as a parish church in the 12th century. Today, it is dubbed as the most significant Gothic edifice in the city. It is the home church to the Catholic Archbishop. The church was shattered in the World War II but was then rebuilt in the next seven years, with worship practices held daily. The cathedral consists of more than 18 altars containing valuable pieces of art. Its striking roof is covered with over 230,000 glossy tiles. It is counted amongst the most prominent landmarks of the city.

Schönbrunn Palace and Gardens – Built in the 18th century, Schönbrunn Palace is one of the major points of interest of Vienna. The site consists of some spectacular architecture, alongside its scenic park-like setting. The site consists of more than 1,400 rooms and apartments including the once used by Empress Maria Theresa. This palace park offers a number of tourist spots such as the Privy Garden, a maze, and labyrinth, the oldest zoo in the world, the Gloriette, a marble summerhouse, sitting atop 200 feet high hill. The palace has been designated a UNESCO World Heritage Site.

The Belvedere Palace – The Belvedere Palace is made up of two magnificent edifices - the Upper (Oberes) Belvedere and the Lower (Unteres) Belvedere. The Prime attractions of the upper palace include the Ground Floor Hall with statues a ceremonial staircase with its opulent stucco relief and frescos. Another highlight is the Marble Hall, a striking two-story hall with many ceiling frescos, paintings, and period sculptures. The Lower Palace also consists of a Marble Hall, this one known for its oval plaster medallions and affluent ceiling fresco alongside a marble gallery that boasts of numerous historic statues. The other prominent sites include the fountain connecting the two palaces, the belvedere gardens, the Palace Stables, the Winter Palace and the Orangery.

The Vienna State Opera House – One of the largest and most spectacular theaters in the world, the Vienna State Opera House has played host to many of the world’s most well-known dancers, singers, composers, soloists, and conductors. More than 300 operatic and ballet performances are staged every year, driven by the passion for music dating back to 1625 when the maiden Viennese Court Opera was performed. The theater has a seating capacity of more than 2,200 people and over 100 musicians. It is also a home to the Vienna Philharmonic Orchestra. Built in 1869, the theater is known for its Early French Renaissance style. The interior attractions include a beautiful and grand staircase to the first floor, an elegant tearoom, and the Schwind Foyer.

The Hofburg – After making your flight booking to Vienna, don’t forget to visit the Hofsburg Imperial Palace which played an essential role in the Austrian government scene since its inception. It has been the residence of some of the most powerful royalties of Europe over the centuries, including the Hapsburgs and the leaders of the Austro-Hungarian Empire and Holy Roman. Today, it is home to the president of the country and also a museum. The Palace has many halls and wings built over the centuries but only three portions are available to the public; the Silver Collection, the Imperial Apartments, and the Sisi Museum, dedicated to the Emperor Franz Joseph’s wife, Elizabeth.

Get the best low-cost flights to Vienna with Lookupfare. Check out our numerous travel offers and grab the best cheap flights and make your trip to the Austrian Capital unforgettable. Also, don’t forget to check out our exciting range of last minute travel deals.