The Jewel City of Australia 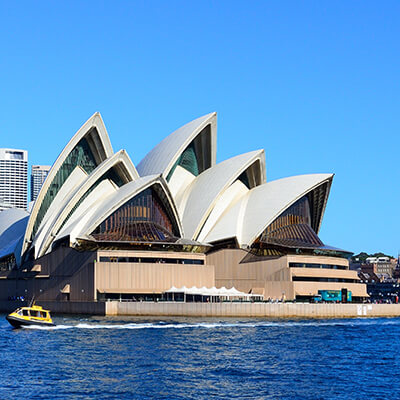 The idyllic city of Sydney will fascinate any traveler willing to unearth a captivating mixture of stunning architecture, iconic landmarks, scenic harbor, lush gardens and remarkable skyline. Go through Lookupfare to book cheap flights to Sydney. Choose from a number of one way flight deals and fly to this beautiful Australian city.

A truly cosmopolitan city full of energy, Sydney will have something to fascinate you regardless of your taste. The city is blessed with such wide range of things to do and must-see sights that your only dilemma would be to choose the spots you want to visit during the trip.

History buffs can explore Sydney’s fabled history in the narrow cobbled pathways and the historic towers of The Rocks, at the city’s remarkable museums and the rock paintings of the Gadigal aboriginal people who once prospered in this city.

Sydney is a great outdoor city thanks to its beautiful harbor and pristine beaches. Throw in the gorgeous weather and the magnificent outdoor pools and parks and you have a perfect outdoor vacation.

Sydney has a vibrant culinary scene. Innovative restaurants, cafes and bars offer creative Aussie cuisines and wine, with breakfasts occupying the starring role. The city also has a very colorful nightlife, regarded as the best on the continent.

Art and culture aficionados will have a wonderful time exploring the many museums, galleries, theaters and festivals.

Sydney Opera House – Sydney Opera House is a designated UNESCO World Heritage Site and the most prominent attraction in the city. This man-made icon is a unique marvel of engineering and architectural design that adds greatly to the beauty of the already stunning Sydney Harbor. The building that was built with a distinct fusion of innovation and creativity hosts more than 1,500 performances each year drawing a crowd of over 1.2 million visitors in a year. The structure consists of restaurants, studios, exhibition rooms, a cinema and a concert hall. Book round trip flight deals to visit one of the greatest landmarks of Australia.

Royal Botanic Garden – Located in close proximity to Sydney Central Business District, the Royal Botanic Garden is an ideal spot to savor nature as you take a stroll in this beautiful park amid one of the world’s business cities. At the gardens, you can enjoy spectacular views of the harbor while you pass through the lush greenery and view the limitless species of trees and plants. There is also detailed information on each of the flora species.

Sydney Harbor Bridge – Built in 1932, Sydney Harbor Bridge is one of Sydney’s best-known landmarks. The bridge is supported by double piers on both the ends. Standing tall at over 440 feet, the bridge connects the harbor’s northern and southern shores in a single curve. People interested in learning about the construction history of the bridge can visit the museum in the southeastern pier. Adventure lovers who want to climb the summit can book the Sydney BridgeClimb.

Bondi Beach – Hop on a last minute flight to Sydney and explore one of the top beaches in Australia. Located in close proximity to the affluent eastern suburbs of Sydney, Bondi Beach is cited as the most beautiful beach of Australia. What makes the beach more alluring are its clear waters and great sand. Bondi is also known for the diligence of its coastguards – so much that is has featured on popular TV Shows.

Hyde Park – Hyde Park encompasses beautiful lawns, fountains, flowers, fig trees and shady picnic spots. Named after London’s Hyde Park, it is a great area for people watching. The park features various prominent attractions such as bronze Archibald Fountain – built to commemorate Australia’s alliance with France during the Second World War, the Anzac War Memorial – honors the victims of WWI. On the north end, there are 3 Georgian Towers - the Supreme Court, St. James Church and the Hyde Park Barracks. On the eastern side, there is the Australian Museum that features the largest collection of natural history in Australia.

Art Gallery of New South Wales – Anchored amid scenic parklands, the Art Gallery of New South Wales is one of the most distinguished art museums in Australia. The building traces its roots to 1874 and features Grand Courts and light-filled galleries with artworks ranging from Asian to European artists to various contemporary artworks from across the globe. The gallery is also home to one of the largest aboriginal art collections in Australia. The site also features a gallery gift shop, restaurant and a café.

Find a wide array of Sydney flight deals on Lookupfare. Download our mobile application and book tickets on the go.