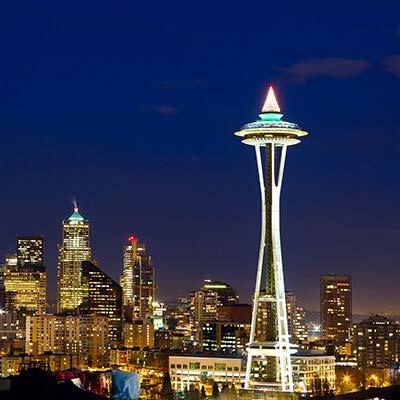 A vast land speckled with skyscrapers and the serene blue waters for company, that’s Seattle in a nutshell. With an important musical heritage, the city has many lively nightclubs for you to break a few moves at. A few names that promise you a good time are Tractor Taverns, Rock Box and The Crocodile. Catch a cheap flight to Seattle and go on a memorable vacation.

Located in Washington, this beautiful seaport city is the biggest one in the state. Its proximity to the water has allowed the city to entertain its visitors with ferry rides and various water sports. Get some cheap airline tickets to Seattle and go for sailing, kayaking and paddle-boarding in this alluring city.

Space Needle- A historic landmark, it is an observation tower which have appeared in many movies and television series. Standing tall in a height of 605 ft., it provides a picturesque panoramic view of the city around it.

Woodland Park Zoo- Located at Phinney Ridge, spanning over the western half of Woodland Park, it is a zoological garden. Its permanent fauna and flora consists of around 300 animal species, 40 of them endangered ones, 7000 trees, 1000 plant species and 50000 shrubs and herbs. These different forms of wildlife are put under different exhibits like Tropical Asia, Zoomazium, African Savanna, Tropical Rain Forest and Australasia.

Pacific Science Center- The best feature of this science museum is the fleet of vans called the ‘Science on Wheels’, which brings hands-on science experiences to different schools all through Pacific Northwest.

Experience Music Project Museum- Founded in 2000, by Microsoft co-founder Paul Allen, it is a non-profit museum dedicated to contemporary pop-culture. It consists of fun interactive galleries like the Sound Lab and On Stage. Other exhibits have been divided into sections such as Art of Fantasy and Horror Cinema.

Pike Place Market- Overlooking the gleaming waters of Elliott Bay, it is a public market inaugurated in 1907. Built on the edge of a steep hill, the market exists on many levels which go down in narrow lanes along the hill. It is a great place to discover delicate art pieces that you just can’t leave behind. If shopping is not your thing, you may simply take a stroll down this beautiful market-place.

After much research, Lookupfare has come up with the best travel packages which cater to the travel needs of each and every person who browse their website and app. These travel packages are of different genre such as one way flight deals, holiday travel offers, group travel offers, last minute flights to Seattle and senior travel deals.