Last updated on Saturday 07/24/2021 at 05:00 AM, the fares mentioned below are for Round Trip flight tickets and inclusive of fuel surcharges, service fee and taxes. Based on historical data, these fares are subject to change without prior notice and cannot be guaranteed at the time of booking. Kindly go through our terms and conditions before booking. 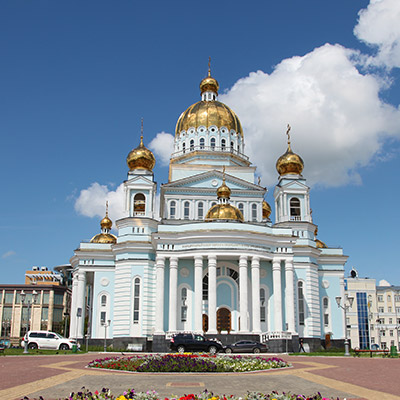 Settled on the confluence of the Saranka and Insar River, Saransk is the capital as well as the economic and cultural center of the Republic of Mordovia. It is one of those Russian cities that have been overshadowed by the allure of prominent destinations like Moscow and Saint Petersburg despite having many great experiences to offer. But that has started to change. People are slowly realizing the idyllic destination that Saransk is and the city is experiencing a rising footfall of travelers.

Founded in the year 1641 in the southeastern outskirts of the Russian kingdom, the city primarily grabs the attention of vacationers with its fascinating history. Monuments that are remnants of its rich past still mark its cityscape. The local way of life is something that draws culture enthusiasts in hordes. So, if you are looking for an off-the-beaten-path destination for a solo adventure or a getaway with family, then grab a few cheap flight tickets to Saransk and start preparing for the time of your life.

Almost every aspect of Saransk leaves visitors amazed. From its rich heritage and fantastic art scene to magnificent architecture, everything you come across during a vacation in the city is awe-inspiring. The same can be said about the local cuisine. Dotting the map of Saransk are several restaurants where you can gorge on mouth-watering Russian and Mordovian delicacies. If you are a foodie, then this is an experience you do not want to miss.

Saransk is served by the Saransk Airport which connects it to several international cities. You can easily find a cheap flight ticket and arrive in Saransk without any hassles. Also, speckling the city are numerous hotels in Saransk that guarantee a delightful stay.

Cathedral of Saint Righteous Warrior Feodor Ushakov - Cathedral of Saint Righteous Warrior Feodor Ushakov came to life when Orthodox Christianity made its way back in to the region in the early 21st century. As the locals felt the need to have a bigger place for worship and religious gatherings after the Republic of Mordovia became a separate diocese in 2001, the construction began soon after. And in 2006, emerged a magnificent white and blue structure topped with giant golden spires with the capacity to house about 3,000 worshipers. Whether you seek a few moments of spiritual peace or great views of an amazing structure, rent a car and head over to the cathedral.

Mordovian Erzia Museum of Visual Arts - Named after the famous sculptor of the 20th century who was born in Mordovia— Stepan Erzia— Mordovian Erzia Museum of Visual Arts is where you can come across incredible pieces of art. You can also admire works of other artists who have brought immense fame to the region such as Fedot Sychkov and Ivan Makarov; as well as many other Russian and Mordovian artists of the 18th and 19th centuries. A visit to this museum will give you an insight in to the artistic heritage of the Mordovian people.

Museum of War and Work Efforts - The history of Russia is marked with military conflicts and many brave hearts have sacrificed their life for the honor of their motherland. That is precisely what Museum of War and Work Efforts celebrates. The museum is dedicated to soldiers who died during the Great Patriotic War of the 20th century. The shape of the museum’s building imitates the borders of Mordovia and is topped by a roof which symbolizes the traditional hat worn by women in the region.

Museum of Mordovia Folk Culture - Partaking in the local culture is amongst the best experiences one can have in Saransk and there is hardly any place better to learn about this heritage of the local people than Museum of Mordovia Folk Culture. The museum is also housed in a 19th century monument which gives a peek in to the regional architectural style. The artifacts of the museum spanning across thousands of years tell about the various aspects of the Mordovian folk culture in detail.

Saransk is not your ordinary destination. It is a hidden gem that has somehow managed to escape the touristy eye for quite long. Board a last minute flight to Saransk and unveil the beautiful charm of this city.