From Chicago to Los Angeles
flights from
Houston to Prague
Super Saver
$586.37
Home Flights Prague
*All fares are quoted in USD.

The Heart of Europe 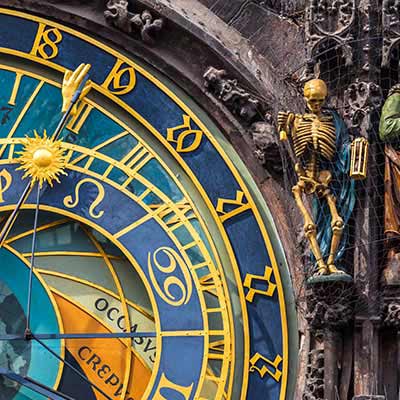 Gothic churches, vibrant baroque buildings, and lively streets are the primary features of the capital city of Czech Republic, Prague.

The beautiful city of Prague has many nicknames such as “City of a Hundred Spires,” “The Left Bank of the Nineties,” “The Golden City,” “The Mother of Cities” and “The Heart of Europe.”  In 1992, the Historic Center of Prague was designated a ‘World Heritage Site’ by UNESCO. The capital city is also the historical capital of Bohemia.

Choose from a wide range of flight deals to Prague with Lookupfare. Take a look at some of the most attractive travel deals and offers and score the best cheap flights to Prague. Also, make sure to check out our exclusive offers on last minute flights to Prague.

Located on the Vltava River in the north-western part of the country, Prague is the capital city of Czech Republic. It is also the largest city in the country and the 14th largest in the European Union. The city is home to an estimated population of 1.26 million people approximately whereas the population of its larger Urban Zone is estimated at an approximate figure of 2 million.

Prague is dubbed as the economic, political and cultural center of Central Europe. It has been listed as an "Alpha-" global city as per the GaWC studies. It often ranks amongst the top tourist destinations in the world. The city is known to welcome more than 6 million tourists every year. Prague has also been ranked as the fifth most visited city in Europe after London, Paris, Istanbul and Rome.

Prague was founded in the Romanesque era and flourished in the Baroque, Renaissance, and Gothic eras. Prague was the capital of the kingdom of Bohemia and the primary residence to various Holy Roman Emperors, including Charles IV. Prague was a very prominent city for the Habsburg Monarchy and the Austro-Hungarian Empire. Prague also played a crucial role in the Bohemian and Protestant Reformation, the 30 year’s War, and in the 20th century by serving as the capital of Czechoslovakia during the post-war communist era and both the world wars.

The capital’s rich history lures the history buffs to make a flight booking to Prague.  The city is home to more than 10 major museums and many cinemas, galleries, theaters and other historical artifacts and exhibits. It also houses a broad range of private and public schools, including the oldest university of Central Europe, Charles University.

Charles Bridge - Built in the 14th century, Charles Bridge is a gothic stone bridge that links the two sides of the city, the Lesser Town and the Old Town. Standing atop River Vltava, this 600-year-old bridge is counted amongst the most iconic landmarks of the city. If you want to get a feel of the tranquil atmosphere of the city, then this is the place to be. Measuring over 2000 feet in length 63 feet of width, Charles Bridge offers one of the most stunning and memorable landscapes in the city.  There are also 30 baroque statues on the bridge, of which the most notable sculptures include the statuaries of the Calvary, the Holy Crucifix and St. Luthgard.

Old Town Square – Old Town Square is one of the two main squares in the city. With its roots lying in the 12th century, the square began as a marketplace for the city. Placed between the Charles Bridge and Wenceslas Square, Old Town Square is often bustling with locals and tourists in the summer. The opulent history of the country is reflected in a diverse fusion of architectural styles like Romanesque, Renaissance, Baroque, Gothic, and Rococo, all displayed in the splendid buildings around the square.  The Old Town Hall boasts of a collection of Renaissance and Gothic buildings whereas the soaring gothic buildings rising from the Tyn Cathedral contrast with St. Nicholas’s baroque style.

Prague Castle – Founded around 880 AD, Prague Castle used to be the seat of the kings of Bohemia. Today, the president residence of the country, it is dubbed as the largest medieval castle in Europe. Located in the Castle District above the Lesser Town, it is one of the premier tourist attractions of the city. Spanning across an area of 18 acres, the castle is centered on three great courtyards.  The most popular landmark in the city and the most dominant tower within the complex is the St. Vitus Cathedral. The castle also consists of three churches, a monastery, a basilica, beautiful gardens, royal stables, defensive towers and a small lane where artisans worked.

Prague Astronomical Clock – One of the most famous tourist points in the city is the Astronomical Clock; a complicated and old clock that tells German time, Old Bohemian time, Babylonian time and sidereal time. The clock also reveals sunrise and sunset, position of the sun in the zodiac and the different phases of the moon.  Crafted in 1410 by a mathematics professor and a clockmaker, the clock has been repaired and kept working for more than 600 years and is the third oldest clock in the world.  The Apostles figures, which are placed in the two upper windows every hour, were added in the year 1865.

Wenceslas Square – One of the two main squares in Prague, Wenceslas Square is a promised land for the shoppers. It started out as city’s horse market in 1348 by Charles IV; Wenceslas Square seems more like a boulevard than a traditional square. Situated in New Town, the Square is home to numerous hotels, clubs, bars, restaurants, shops and banks, making it city’s premier nightlife, entertainment and commercial area. The Square is the center point to most of the city, as both Charles Bridge and Old Town Square are just a five-minute walk away and all the three metro lines coincide in the square. Wenceslas Square is also home to the Prague State Opera and Grand National Museum.

Book low-cost flights to Prague with Lookupfare. Check out our latest deals for top destinations around the world and pick the best-value offers.