From Chicago to Los Angeles
flights from
Miami to Phuket
Super Saver
$2320.57
Home Flights Phuket
*All fares are quoted in USD. 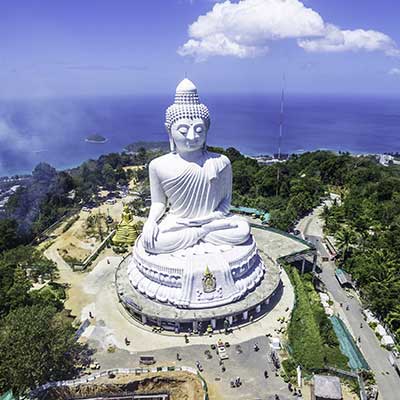 If you are a nature lover, Phuket is a destination designed by nature just for you to set your eye on. The colors and celebrations of Phuket calls out loud to the tourists, adventurers, solo travelers or group travelers, to take a plunge in the rich culture and heritage of the city. So, wait no more and get hold of those cheap airline tickets to Phuket and have an experience of your lifetime.

Phuket promises a little adventure for everybody out there who set their feet on this city. This is Holy Grail for beach lovers, with the most amazing beaches with stunning scenic beauties. Phuket can be a quick getaway for family trips or might just be the destination for exploring life’s adventures with your friends. Being Thailand’s largest Island, Phuket city got its name from a Malay word “bukit” which defines as hills. The reason is understood once you enter the scenic boundary of Phuket which has best of both world, Sea with cliffs and hills. A trip to Phuket is meant for your adrenaline rush. So book your flight and get going.

Before you book your last minute flights to Phuket, glance through some of the important facts and information about Phuket. And you can thank us later!

Weather of a city is one of the most important factors that need to be considered before planning a trip and even before booking cheap flight tickets to a destination city. Phuket, being situated in the tropical zone, experiences a tropical monsoon climate, as per the climate classification. What does this mean for you as a traveler eyeing those flight deals to Phuket? Located near the equator, Phuket rarely experiences any seasonal variation apart from two major seasons identified as dry and wet season. In case you book your flight tickets for any time between the months December to March, you will experience the dry season while a booking gets done in other eight months will take you to Phuket’s wet season.

When is the best time to book a flight to Phuket?

Continuous spell of rain in Phuket from May to October make these months not hospitable to tourists as the weather becomes a bit uncomfortable with rising humidity along with the warm weather. But for those who are looking for cheap flights to Phuket, these months might be a promising time period to aim at. With less rush of tourists in these months, often the hotels and flight bookings are easier to get and often come within budget price. November to February is the time span which experiences maximum tourist influx in the Phuket city. So in case you wish to travel to Phuket at this time of the year, we would recommend you to pre-book your flights 5-6 months prior to your travel.

Phuket has long been on the top of the list of holiday destination of every traveler around the world. Honeymoon destination or a quality time holiday with friends and family, Phuket has been on your most awaited holiday destination. Or maybe you just wish to become one with the tranquility and beauty of this city and the get inspired with the nature’s aura that surrounds the city. You can now book low-cost airlines that operateflights to Phuket from Kolkata, India, like Air Asia, Hahn Air Systems, Thai Airways, Qatar Airways, Cathay dragon and Cathay Pacific. There are many low-cost flights to Phuketfrom London which are operated by world class airlines such as Thai Airways, EVA Air, Qatar Airways, Etihad Airways, British Airways and Austrian airways. People travel to Phuket even from the Domestic destinations such as Bangkok and generally opt for the flights operated by Bangkok Airways, AirAsia, Thai Lion Air, Thai Smile, VietJet Air, Nok Air, Hahn Air Systems, etc. With ever expanding network of International flights, journey from one side of the earth to the other is completed within a day. Qatar Airways and Etihad Airways operate between Phuket and Chicago.

You can get around Phuket in either of the following ways:

In this land of color and weirdly beautiful events, the festivals and events will not only just etch their existence on your mind as a special memory but captivate your senses as you witness the celebrations of these festivals. Mostly, these festivals take place in the month of October to January, with a handful of them listed on April. So, while you are looking for cheap airline tickets or just browsing through the last minute flights, make sure you have an idea about the popular festival periods of Phuket, which would in turn help you to take an informed decision about the trip itinerary. After you browse through the following brief facts about the events in Phuket, continue your search for last minute flight deals.