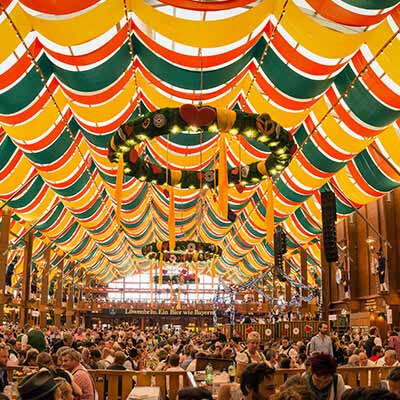 Centuries-old buildings, countless museums and annual Oktoberfest celebration are some the features of the German city, Munich.

Fly with Lookupfare and grab the best cheap flights to Munich. Look into our various Munich Flight Deals and find the best offer. Also, don’t forget to take a peek some of our exciting offers on last minute flights.

Munich is the capital and the most populous city of the German state of Bavaria. Ranked an alpha-world city, it is a major center for arts, finance, culture, publishing, innovation, business, education, advanced technologies and tourism in the country and Europe.

English Garden – A highly popular scenic park, more international than its name suggests, it boasts of a Chinese pagoda, Greek Temple and a Japanese tea house. Just find some cheap flights to Munich and savor the unmatched beauty of this stunning garden.

Marienplatz – A significant public square, perhaps the largest in the city, still stands as the central point of social activity in Munich, much as it has throughout its history.

BMW Museum - The museum displays the technical development of motorcycles and cars. It also consists of some exhibits revealing about the history of the company. Many old cars and motorcycles are showcased along a spiral ramp that twists along the inside of the bowl-shaped building.

Asam's Church - This sacred site was built in the mid 1700's by two brothers named Cosmas Damian and Egid Quirin Asam, who took a vow to build a church if they successfully avoid a shipwreck.

Allianz Arena – Home to one of the best football clubs in the world, Bayern Munich. Witness some of the best players in world football battle it out against the other top teams in Germany such as Robert Lewandowski, Thomas Muller, Manuel Neuer etc.

Find the best low-cost flights to Munich with Lookupfare and make your trip to beautiful Bavarian Capital a one to cherish for. Browse through our number of offers and find the best cheap plane tickets to Munich.