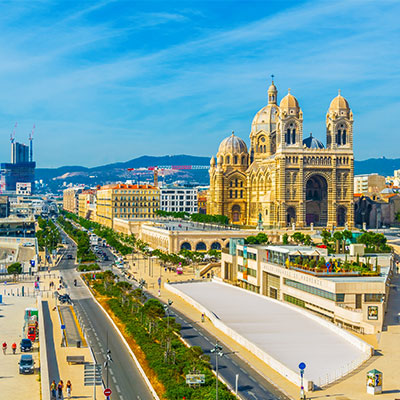 Marseille is a beautiful cosmopolitan city in France which is on the rise to give a tough competition to its glamorous neighbors such as Nice, Cannes and St. Tropez. A flight to Marseille will take you to a port city where the harbor remains abuzz day in and day out. And, the historic sites take turns to tell great stories from the past. It is a city where culture and history walk hand in hand. When in Marseille you can devour the dishes of its authentic cuisine, walk along the narrow lanes of a colorful neighborhood, admire the majestic architectural wonders and soak in the Mediterranean sunshine.

The best way to truly get an insight into the city is by exploring it on foot. And the old and colorful neighborhood of Marseille, Le Panier, is just the place to start with. It is the city’s oldest quarter. Its narrow and steep winding streets call for great photo ops. The soft pastel buildings stand in stark contrast to the dark gray streets. This artistic colony has a lot of hangout places. There are cafes to unwind and try out Algerian cuisine and many pretty artisan boutiques that display amazing items for sale. Le Panier is not just a tourist venue but also a residential place where you get to see families going about their daily life. Many hotels are located in this neighborhood. Therefore, you can make hotel reservations here to stay close to all the fun things in the city.

This hilltop church in Marseille is an unmissable attraction. Sitting on the highest point in the city, La Garde, this 19th century Romano-Byzantine basilica is an architectural marvel. Originally, it served as an observation tower during the middle ages. This spectacular church which was built between 1853 and 1864 is bedazzled with a lovely interior. It is gracefully adorned by gilded mosaic cupolas of dark and bright marbles. The terrace of the church gives a lovely view of the city. It also gives an interrupted view of the old harbor and Frioul Islands in the Mediterranean Sea. So, book cheap flight tickets to have an amazing time exploring this French city.

Musée des Civilisations de l'Europe et de la Méditerranée is a stunning museum complex equipped with many galleries spread across three different sites. Through its galleries, you can learn about the European and Mediterranean civilizations. One of the best parts of the museum is located at the J4 Pier. It contains various galleries such as the Seven Wonders of the World, the invention of gods, the visions of Jerusalem and the treasures of the spice route. The 12th century Fort Saint-Jean which is connected by a suspended bridge to the main Musée is also a note-worthy site to visit. It is beautified by the lovely Mediterranean gardens.

Located in the charming neighborhood of the Place des Moulins, the Vieille Charité is a historic attraction which deserves a visit during your stay at Marseille. This structure was built in the year 1640 to shelter the poor. With time, in 1749, a public hospital was also added to the complex. There is also a chapel located in the courtyard of the complex that makes it a perfect example of the Italian baroque architecture. The façade of the church dates back to 1863 with impressive pillars that has intricate carvings on the end. Centre de la Vieille Charité is a museum located inside Vieille Charité. It hosts exhibitions showcasing contemporary art pieces.

Château d'If is located on the tiny island of If in the Frioul archipelago opposite Vieux Port of Marseille. The impressive location of the fortress draws many travelers from all across the world. You can take a ferry and sail to arrive at this scenic fortress which was built around mid-1500s during the reign of King François I. Later somewhere around the 1800s, it was turned into an island prison. The fortress has been made immortal by the literary work of Alexander Dumas in his 19th century novel of “The Count of Monte Cristo.” Though the novel was a pure work of fiction, a former cell in the dungeon has been designated to the Count of Monte Cristo who was depicted as a prisoner at Château d'If for 12 years.

A picturesque attraction located near the Marseille harbor is Cathédrale de la Major. This magnificent structure is easily recognizable by its unique exterior décor. Besides, the impressive dome shaped towers are a sight to behold. The dome rises to a height of about 16 meters. Cathédrale de la Major was built between 1852 and 1893 using a mixture of white and green limestone. It has a lovely blend of Romanesque and Byzantine architectural styles. The interior of the cathedral is an impressive masterpiece. The church is adorned with mosaic and marble décor and in the crypt, you can also find the tombs of the Bishops of Marseilles.

Marseille is truly an outstanding port city just perfect for a vacation. But if you are looking for something more secluded, then Calanques National Park is not far from the city. You can easily rent a car and drive to the park which is located approximately 9 miles from the city center. The park has a unique landscape with limestone rock walls, fjord-like coves and dramatic Massif des Calanques Mountains. This is an amazing place to visit for outdoor recreational activities. It gives you an opportunity to swim, kayak, rock climb and even hike to some of the exquisite trails around the park. So, hop on a last minute flight to Marseille and embrace nature at its best.