The City of Red Roofed Buildings 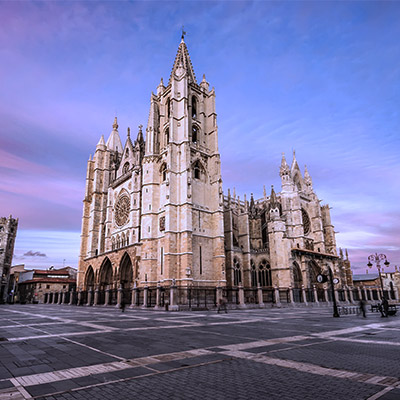 The city of León, located in northwest Spain, is surrounded by farms on all sides. The roads to León are jeweled with country side vistas and beautiful tiny villages. The city however, is not tiny and cannot be confused for countryside at all. If you see León from a bird’s-eye view, everything seems red. It is because the city is dotted with buildings that mostly have red roofs. Talking of buildings, the architecture here is spell binding. Gothic, Roman, and Renaissance styles of architecture are most commonly found in León. This gives a depth to the city, a depth that makes visitors feel as if they are waddling in the sea of artistic creativity. To sum it up, the significant historical buildings, soothing vibes, and spiritual energy of León tug the right chords of your heart. Book a cheap flight to León and uncover a perfect blend of spirituality and fun.

León is like a man dressed in a tuxedo. No other men’s clothing is classier than a tux. Similar is the case with León. The city oozes class with its cobblestone paths, narrow lanes, and nonchalant inhabitants. The city derives its class not from minimalism but from the number of great artists who worked here to add something to León’s grace and class. Artists such as Antoni Gaudi opened their hearts and minds to the city adorning it with some of their classiest work ever.

The city also has a mesmerizing pub district called Barrio Húmedo. Head to the Old Town (Barrio Húmedo) for a beer or your preferred glass of beverage. The serving of tapas you find here will light up your taste buds and leave you asking for more. The best way to explore this part of the town is by walking. You might get lost in the intricate crisscross of the pathways in Barrio Húmedo. But, trust us, it’s not such a bad thing. Because, you will end up finding a bar tucked in a corner that will lead you to experience the true Spanish hospitality and drinking companionship. This part of the town has over 100 bars and most of them serve free tapas. To top it all, these bars have live music scenes with regular band performances. Book a flight to León and bar hop around Barrio Húmedo for an amazing nightlife experience of the city.

León Cathedral - Also known as the House of Light, León Cathedral was built in the 13th century. Before being turned into a church, this very place was the sight of Roman baths dating back to the 2nd century. The cathedral is arguably the most impressive piece of Gothic architecture in Spain. Two towers stand impressively atop the main building. The cathedral boasts an impressive architecture that is embellished with sculptures all around its premises. One astonishing fact about the cathedral is that it has over 128 windows. Get amazing last minute flight deals and witness one of the greatest work of architecture in Spain.

The Museo de León - Museo de León is the oldest and the most important museum in the region. The museum opened to public in late 1800s and has remained in service for about 15 decades. A feat in itself but something that is overshadowed by the museum’s collection. The museum has various artifacts dating back to the Bronze and Iron Age. It takes visitors on a journey that transcends through time, beginning with the start of life to the present day. The extensive collection that the museums houses is remarkable. Rent a car and drive to Museo de León to take a closer look at the evolution of human life and our planet.

The Convento de San Marcos - Almost everybody is familiar with the French Renaissance but not many know of the Spanish Renaissance. The best introduction to the counterpart of French Renaissance is The Convento de San Marcos. A proud specimen of the architectural prowess of Spanish architects. The building is symmetrical on all sides and is adorned in golden and greyish hues. The building is used as a luxury hotel today, therefore, you should make a hotel booking in León and pamper yourself to good times.

León is sunny and warm year around, however, the summers can be unbearably warm. The narrow lanes and tall structures prevent any appeasing wind from reaching the people on the roads. On the other hand, winters in León can get extremely cold. The temperatures can very easily drop below freezing point. Therefore, the best time to visit this city is from September to October. The temperatures are pleasant during these months and you can stroll through the cobbled streets without breaking in to sweat or feeling the extreme chills. Book a last minute flight to León during the fall season and walk the historical streets of this mesmerizing city.