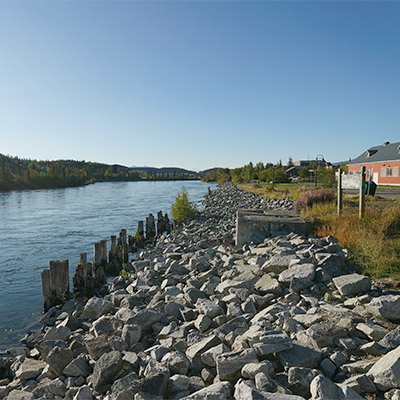 Kaltag is a small village in Yukon-Koyukuk Census Area, Alaska. The town is situated on the west bank of Yukon River. According to the 2010 census, the population of the town was 190 residents. Discover our wide range of kaltag flight deals and grab the best one way flight deals and round trip flight deals.

Kaltag’s economy is primarily subsistence. Wildlife, fish and local vegetation such as berries are used as food sources. The majority of the employment is with the tribe, local government, school, the BLM and fishing industry.

Kaltag is situated in Koyukon Athabascan territory. The village was named by the Russians for the Yukons called the kaltaga. It was used as a cemetery for the neighboring villages. There was a total of 12 summer fish camps situated on the Yukon River between Nowitna River and Koyukuk River.

Koyukon was hit by various major epidemics, the first of them hitting in 1839. On the northern side of Yukon, a military telegraph line was built in 1867. In 1887, a Roman Catholic Mission and school were established upriver in Nulato.

During the 1900s, Yukon was struck by measles epidemic and food shortage affecting about one-third of the native population. Survivors from nearby areas moved to what they referred to as ‘Kaltag.’ A post office was opened for a brief period in 1903.

Owing to its location, Kaltag went through some major economic changes. The post office was reopened in 1909. The first school was established in 1925. A clinic, airport and watering point were opened in 1960s. In 1969, the local government was incorporated.

The Stick Dance Festival – This dance festival attracts many people from the surrounding villages. This week-long festival is organized by relatives of recently deceased people to appreciate the condolences of the people at the time of mourning.

Take a look at our variety of flight deals and offers and enjoy the best cheap flights to Kaltag from Lookupfare.