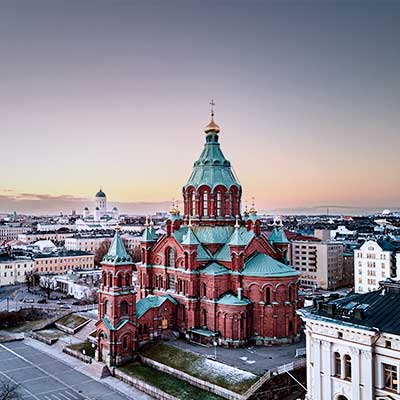 Helsinki is an underdog city. It’s always been overshadowed by more famous cities in the neighboring countries. But, we all know what happens to underdogs. They end up being at the top, always! Helsinki’s story, in its recent rise, seems very similar. From being practically unknown in the past, the city today is wooing crowds from all over the world. The city has lush green forests and ample of waterfronts thanks to all the islands it’s surrounded by. In summers, the city sees warm and pleasant temperatures perfect for swimming and sunbathing at the gorgeous beaches. Book cheap flights to Helsinki and explore the Art Nouveau architecture of the city.

The city has a very calm and soothing vibe. The second you step in Helsinki, you feel your muscles relaxing, your worry lines vanishing, and your boss fading away from your memory. The city is fondly called the Daughter of the Baltic. One thing that catches the attention of visitors is how safe the city of Helsinki is for everyone. This city is one of the safest cities in Europe. Women solo travelers can roam around freely and conveniently at all times. Muggings, scams, and kidnappings are unheard of and tourists can travel around the city with ease and in peace.

Helsinki is a humble city. However, its humbleness should not be mistaken for lack of attractions. Helsinki offers numerous attractions and things to do. The city is peaceful, calm, and serene but at the same time it is incredibly happening as well. The vibrancy of the city is not displayed on its sleeves but is like a chocolate inside its wrapper. Everyone knows that the city is happening, you just need to peel off the cover to get to it. This, honestly, makes the city so much more appealing. The reason to this is that Helsinki doesn’t impose its liveliness and activities on people who visit here to just relax and chill. Here you can quietly take a stroll at the beach or sit in one of the beautiful parks doing nothing and at the same time, you can party in to the wee hours in one of the uber-cool nightclubs. Make a hotel booking near the Eerikinkatu area and live close to the best nightclubs in the city.

Suomenlinna - Suomenlinna is exquisite for multiple reasons. Construction of this fortress began in the 18th century while the country of Finland was still a part of Sweden. The name Suomenlinna means a sea fortress. The fortress consists of over 200 buildings spread across 6 islands. Suomenlinna has guarded three empires in its history — Swedish Empire, Russian Empire, and the Kingdom of Finland. The fortress is now a UNESCO World Heritage Site and is the most famous attraction in the whole of Finland, drawing crowds from far and wide. Another fun fact about Suomenlinna is that some 800 people actually live here.

Design District - Finland has a long history of design and Helsinki is the center of all the designing. The city was deemed as the World Design Capital for the year 2012. The design district includes a vast number of streets and locations. Here you can find boutiques, designer apparel shops, and cafés with beautiful contemporary architecture that goes well with the surroundings. Every year, in September, the Design District hosts the Design Week which brings together designers from all over the world. A must visit place if you like human ingenuity and creativity as well as shopping.

Nuuksio National Park - Barely an hour’s drive from Helsinki is the Nuuksio National Park. A hub of fauna and flora that piques your interest as you stand outside but once you enter, you get bewitched. The dense woods and marked trails create a sense of calm that can only be found in Mother Nature’s arms. The park has several lakes and ponds and visitors can set fishing lines and spend the day surrounded by a symphony of forest sounds. The park offers different things at different times of the year. In summers, you can trek around the park through beautiful trails with gorgeous natural arches giving ample shade and providing aesthetic vistas. You can also rock climb during the summers. In winters, the park becomes a place to ski and ice climb. One of the best things to do in the park is to take part in Geocaching. Geocaching is a modern day activity, wherein people from all over the world hide certain things such as a pen and notebook and put the coordinates of the hiding place on an app or social media. Travelers then head out to these places to find the hidden objects using GPS, enter their names into the notebook and then hide them back. This is one of the best and most fun ways to explore the park. Rent a car in the city and drive to Nuuksio National Park. Also, the drive is very rewarding as it takes you through some extremely scenic roads.

The people of Helsinki are known for their companionship and warmth. The people are helpful and enjoy conversations with tourists. The best part is that most people in Helsinki are well versed in the English language and are not that wary of foreigners. Another great thing about the city is its food. The variety and freshness of sea food available here has made Helsinki into a city that has perfected the art of cooking and serving sea food. One of the best sea food dishes to have in the city is Cray fish along with pea soup. Book a flight to Helsinki and taste the sea food delicacies of the Finnish capital.