Last updated on Sunday 02/23/2020 at 05:00 AM, the fares mentioned below are for Round Trip flight tickets and inclusive of fuel surcharges, service fee and taxes. Based on historical data, these fares are subject to change without prior notice and cannot be guaranteed at the time of booking. Kindly go through our terms and conditions before booking.

Rome of the Caribbean 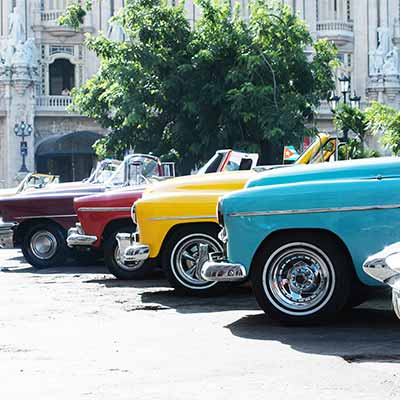 Referred to as “The city trapped in time”, Havana is the capital city of Cuba.

With an estimated population of approximately 2.1 million residents, Havana is the largest city in Cuba. It is also the leading commercial center of the country. The city is seat for Cuban government and also houses several ministries, headquarters of industrial corporations and more than 90 ambassadorial offices. Havana also accounts for having one of the highest GDP in the country, a good portion of which comes from tourism.

Havana is renowned for its history, culture, monuments and architecture. In 2015, it was also ranked among the New 7 Wonder Cities in the world. Havana is also dubbed as the leading cultural center of the country and lures cultural buffs from all across the world thanks to its wide array of cultural points of interest.

Old Havana - Old Havana was designated as a UNESCO World Heritage Site in the year 1982. The old style charm will certainly give you the feel of the days gone by. Graceful Baroque and Neoclassical towers have been properly maintained in their former sophistication. The highlights of the site include the splendid Catedral de San Cristobal -a commemoration of the Cuban Baroque style, Castillo de la Real Fuerza - a remarkable military fortress and the famous squares of Plaza de Armas and Plaza Vieja. After exploring the affluent historical chronicles of this magnificent quarter, take a tour of the 114 feet tower of the Camera Obscura for a stunning view of these classic gems. Finally, head to La Bodeguita del Medio and relish some delicious seafood alongside refreshing cold beverages.

Castillo de los Tres Reyes del Morro - Also referred to as El Morro, the castle proudly stands at the entry point of Bay of Havana. The castle was erected in the late 16th century and early 17th century to safeguard against the regular threats caused by pirate attacks. Most of the castle is beautifully restored in its original form. The major changes were made to a lighthouse which was reconstructed a number of times and substituted with a new one made of solid stone in the 19th century.  Today, it is open to tourists who can explore the castle alongside savoring the scenic views of the ocean and the city from its upper platforms.

Fortaleza de San Carlos de la Cabana - At the time of its erection, the fort was said to be the largest ever built by the Spanish as well as the most expensive one in the 1770s. Also known as La Cabana, the Spanish began the construction of the fort following the British occupation. The fort is located on the top of La Cabana Hill. It was originally built to be used as a military prison and later was converted into the headquarters for the Che Guevera post the revolution. Today, the fort is home to a few museums. The most prominent one is the Museo de Comandancia del Che, where the office of the Che Guevera is properly restored as it was originally made.

El Capitolio - El Capitolio is Spanish for National Capitol Building. Inaugurated in 1929, the building is one of the most popular tourist points in the city. Standing tall from the city skyline, this beautiful building showcases the perfect fusion of Art Nouveau and Neoclassical styles. The building was originally built as the house of the government and it served until 1959, post the Cuban Revolution. Today, it is the site of the Cuban Academy of Sciences. The building also boasts of the third largest indoor statue in the world.

Museo Nacional de Bellas Artes - Spanning across two towers, Museo Nacional de Bellas Artes is a promised land for the art and history buffs. The museum features masterpieces by European artists and boasts of over 600 works of Ancient Art, beginning from the Egyptian to the Roman times. The visitors can savor the remarkable collection of paintings, sculptures and prints. One of the primary highlights of the museum is the unique marble structure called the "Form, Space and Light," placed at the entrance of the museum.

Book with Lookupfare and get the best low-cost flights to Havana. Find flights to destinations all across the globe at the lowest fares.