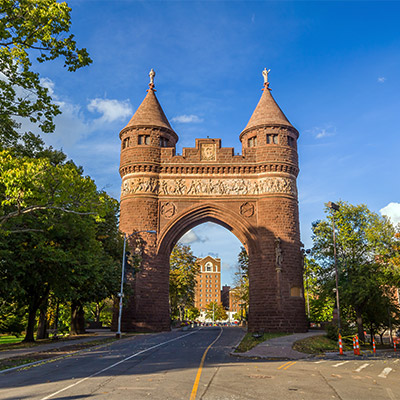 One of the oldest cities in the US, Hartford has a long history. The city has been dubbed as “the insurance capital of the world.” This is the place where Colt started his famous gun company. The city became quite prominent to the economy of the country in the late 18th century with the influx of money from various industries. You must be wondering why we are telling you the history. The reason is that because of its history, the city of Hartford has some of the most flamboyant architecture in the world. Huge mansions and public buildings are the crowning jewels of this charismatic city. Book cheap flights to Hartford and uncover the forgotten gem of New England.

Often called the gateway to New England, the city of Hartford doesn’t enjoy as much fame as its fellow New England cities. While Boston and New Haven have enjoyed a lot of fame and tourist footfall, Hartford has often been ignored. Not anymore, though. The city is becoming more and more attractive to tourists. After all, it is a beautiful city with a plethora of attractions.

The beautiful Connecticut River runs along the western borders of the city, adding a serene charm. Trees of all kinds skirt the river banks and people can be seen picnicking at these spots. Every street is shaded by trees and there are plenty of parks to relax and sunbathe. Certain preserved wooded areas are also great for trekking and offer picturesque trails and tracks. You can ride around in a bike or just walk and take in all the peace and tranquility. All in all, the city is quite green. Grab last minute flight deals to the city and explore all the attractions Hartford is home to.

Mark Twain said, “Travel is fatal to prejudice, bigotry, and narrow-mindedness, and many of our people need it sorely on these accounts. Broad, wholesome, charitable views of men and things cannot be acquired by vegetating in one little corner of the earth all one's lifetime.” It only makes sense that once we are in Hartford, we pay homage to one of the greatest writers of all time.

Born as Samuel Langhorne Clemens, Mark Twain was the alias this legendary writer used while creating works such as Adventures of Huckleberry Finn and The Adventures of Tom Sawyer. He conceived, not surprisingly, both these literature giants in Hartford. Visit Mark Twain House and Museum for a better understanding of this author and his life. If you are not such a big fan, visit the house just for its aesthetic value. It is incredibly gorgeous. Make a hotel booking that is close to the Mark Twain House and Museum as the area has some spectacularly designed buildings.

Humans have an unexplainable attraction to roses. A universal emblem of love, rose has been the theme of many a stories since humans have learned to write. No other flower has been written about so much and, therefore, it is only natural that one must visit a rose garden whenever possible. Especially when the rose garden in question is Elizabeth Park Rose Garden. The park opened its gates to public in the year 1904 making it the oldest municipal rose garden in the US. It is also the third largest in the country. A must visit for garden lovers. Rent a car and drive to the Elizabeth Park Rose Garden as the road leading to it witness almost negligible traffic and the way is aptly pretty.

When you are in a city as old as Hartford, there are many nation’s firsts you come across. Wadsworth Atheneum is another such museum. Deemed as the oldest public art museum in the US, Wadsworth Atheneum Museum of Art is housed in a Gothic Revival building. The building itself is iconic and has an elegant castle like feel to it. The museum houses over 50000 significant artwork. The styles of paintings displayed here range from impressionist, modernist to contemporary. The museum is said to be one of the largest art museums in the state of Connecticut. All these attributes have led to the museum being listed on the US National Register of Historical Places.

Hartford is not just famous for Mark Twain. The city is a delight for food lovers. The city’s culinary expertise is almost as significant as its history. One restaurant that should always serve as the introduction to Hartford’s food scene is ON20. The classy restaurant is located on the 20th floor and opens up to the splendid views of the Connecticut River. If you like a healthy dose of live music with your food, then head to Max Downtown. Book a low cost flight to Hartford and dine at some of the most exquisite restaurants in the city.