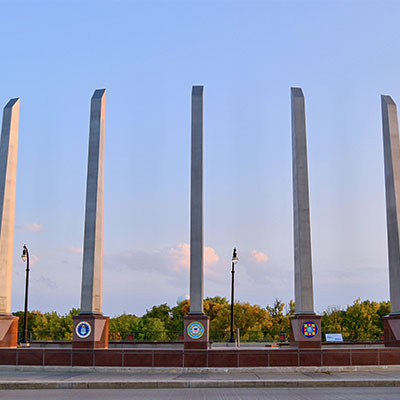 Fargo is North Dakota’s biggest and the most populous city. The original name of the city was ‘Centralia’, but it was later renamed ‘Fargo’. The new name came from ‘William Fargo’, the founder of Wells Fargo Company. The city of Fargo is located along the Red River of the North floodplain and is bordered by Moorhead along the Minnesota side. Hamar in Norway is Fargo’s sister city. The North Dakota State University is an essential part of Fargo.

The biggest challenge that the residents of the Fargo city face is flooding. Since the Red River flows to the north of the city, the melting snow and river ice often become the cause of the overflow. So keep your waders handy.

Beer lovers can find a local brewery easily and head straight to the Taproom to try one as per their choice. Checkout our website for low cost flights to Fargo and we promise to help you save a few bucks for the beers and the fun in Fargo. Not just beer, you name anything and the markets in Fargo have it all.

If you are a female traveler planning a solo trip to Fargo, then there is nothing to worry as the city of Fargo is known for its low crime rate. So when in Fargo, you can involve yourself in anything ranging from adventurous activities to cultural activities. Another feather in the cap is having the lowest employment rate in the United States.

The residents of the Fargo city have their own source of entertainment. For the locals, theater scene in Fargo is a way to enjoy the culture of their city. The Art Deco Fargo Theater is known for hosting live performances and movie screening.

The Fargo Air Museum is the home to various types of historic aircraft, 90% of which are still in flying condition. The historic aircraft on display include a Piper J3-C65 Cub, a North American P-51D Mustand and Velocity Fixed Wing Aircraft. At the Fargo Air Museum, you will also find a full-size replica of an aircraft built by the Wright Brothers.

The Red River Zoo in the Fargo city is committed to preserving the cold weather animals that are found in the northern plains. The zoo is spread over 33 acres of land and has over 500 trees and shrubs enhancing the beauty of the landscape. You will get to see around 300 animals belonging to 75 different species if you make a stop at the zoo.

The animals in the zoo are kept in enclosures that have been designed to best resemble their natural habitats. The zoo also boasts off several endangered species and many exotic animals. If you are visiting the city with kids, then Red River Zoo must be your list of places to visit in Fargo, North Dakota.

The Fargodome is the home of the North Dakota State University Bison football team. It is an indoor sports stadium located on the campus of the North Dakota State University. Not just football matches, the sports stadium also hosts musical concerts, trade shows and various athletic events. For a football game, the indoor stadium has a seating capacity of 18,700 people whereas for an event like music concert, it can accommodate over 25,000.

The Bonanzaville USA is a history museum spread over 12 acres of land, featuring 47 historic buildings and over 400,000 artifacts. The buildings that are a part of the museum have been moved from other locations and have been placed to form a village setting. The buildings include a drug store, fire station, jail, church, general store and many more. The museum also contains other museums like telephone museum, a law enforcement museum and a newspaper printing press.

Visiting Drekker Brewing Company in the Fargo city is a ‘must-do’ thing if you are a beer lover. In the age of machines, the Drekker is still serving hand crafted beers. Once here, you can take an inside tour to learn about the process that goes into brewing the most popular beers in town. You can also visit the taproom at Drekker to get flights, pints and growlers. Limited food items are served at the Drekker, so you can opt for something from their small menu or bring some food from outside.

Visiting this museum is one of the best things a traveler can do when in Fargo city. Over the years, the museum has collected and preserved around 4,000 artifacts of local, national and international art. The museum also hosts Rolling Plains Art Gallery on a semi-trailer that serves the purpose of moving the pieces of art from the museum to the communities outside the city of Fargo.

If you are planning to visit the biggest city of North Dakota, then Lookupfare is here to help you with booking your flights to Fargo. With our wide range of offers on online flight bookings, we promise to get you cheap flights to Fargo.

If you a traveling on a budget, you can check the special deals section on our website for low cost flights to Fargo.