Masterpiece on the Mississippi 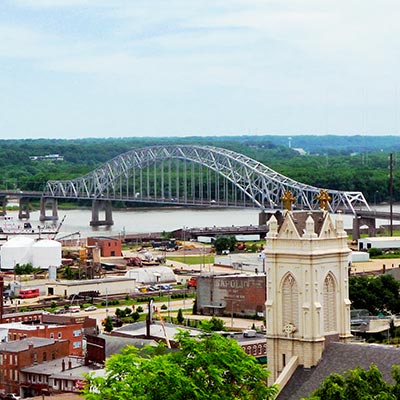 Dubuque is the seat of Dubuque County in the state of Iowa, United States. If you’re searching for cheap flights to Dubuque, then look no further. Find the best cheap flights tickets on online flight booking with Lookupfare. Choose from an extensive array of flight deals and grab the best-in-value deals. You can also find some of the most unbelievable offers on last minute flights to Dubuque.

Dubuque is a beautiful little town located in the banks of Mississippi River. It is situated at the junction of three states - Iowa, Illinois, and Wisconsin, a region that is collectively referred to as the Tri-State Area. The city also serves as the cultural, educational, commercial and industrial hub for the area. It is among the few cities in the state with hills. It is a popular tourist destination featuring the city’s distinctive architecture and river location. It is also the site of 5 higher educational institutions which makes the city a center for learning and culture.

For a long time, Dubuque has been a prominent center of manufacturing. The economy of the city grew rapidly and diversified to other sectors in the early years of the 21st century. In 2005, Dubuque was the leading city in the state and Midwest in terms of job opportunities and was placed on the list of the fastest-growing economies in the country.  Apart from being a major industrial sector, the city is also an important financial, publishing, tourism, health care and educational center.

The best time to explore Dubuque is in the fall season. The temperatures are pleasant and the humidity levels come down significantly. Fall season usually begins in September and lasts until the end of October and some years till the first half of November.

But if you’re planning a budget trip, then a winter trip is recommended. Though, the temperatures could be extremely harsh, you will be rewarded with discounted hotel tariffs along low-cost flights to Dubuque.

National Mississippi River Museum & Aquarium - The National Mississippi River Museum & Aquarium tells the visitors the intriguing stories of America’s rivers. The museum has a large campus and features two major centers that display the various aspects of life on Mississippi. The center features many aquariums within the campus that feature living representatives of the various species of wildlife inhabiting the Mississippi River, a blacksmith shop, a historic train depot, raptor aviaries, steam boilers, a stream, and much more. The campus also houses the Mississippi Discovery Center that offers an array of activities to the visitors and a 3D theater that plays several interesting movies such as Flying Monsters.

Mines of Spain Recreation Area – Located on the outskirts of the city, the Mines of Spain Recreation Area is a state park spread across 1,439 acres of land. The park has interesting land forms, an array of plant species and flora and fauna communities. The major part of the area is covered with prairies and forests and is largely jagged with over 200 years old burr oaks. Several parts of the park were earlier used for logging, cropping, mining and grazing. The area also features 4 miles of ski trails and 12 miles of hike trails. If you’re lucky, you might catch a glimpse of some rare animals such as bald eagles, flying squirrels, bobcats, etc.

Fenelon Place Elevator - The Fenelon Place elevator is considered to be the shortest and steepest scenic railway in the world. Measuring about 300 feet in length and 189 feet in the air, it carries the visitors from Fourth Street to the Fenelon Place. Once at the top, you can savor in the majestic views of the Dubuque business district, Mississippi River and the three states amidst. The elevator was created by a former state senator and mayor of Dubuque, Mr. J. K. Graves.

Eagle Point Park – Established in 1980, Eagle Point Park overlooks the Mississippi River. Spanning across 164 acres, it offers spectacular views of three states – Wisconsin, Illinois and Iowa. The park features an array of facilities for the visitors such as a terrace room, veranda rooms, a riverfront pavilion and the Shiras Memorial Pavilion. Some of the other highlights of the park include the Rock Garden, a music band stage, several tennis courts, a spray fountain and a fish pond. The park also plays host to numerous celebrations and events hosting more than 1000 in a year. It also features miles of walking, biking and hiking trails spread across the park.

Dubuque Museum of Art – Founded in 1974, the Dubuque Museum of Art boasts of over 2,000 pieces of American artworks primarily. It has one of the most comprehensive compilations of Grant Wood paintings, a rare collection of the American Indian photographs by Edward S. Curtis and a variety of touring exhibitions.