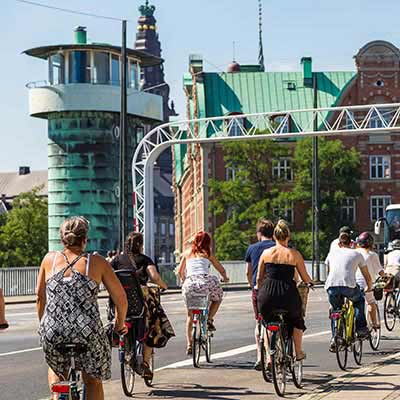 Stunning skyline, lively streets, and luscious scenery are few of the features of the capital city of Denmark, Copenhagen.

With an estimated population of over 600,000 residents, Copenhagen is the most populous city of Denmark. The metropolitan area of the city boasts of a population of a little over 2 million people. Located on the eastern coast of Zealand island, another small part of the city is situated on Amager.  The strait of Øresund separates the city from Malmö, Sweden. The Øresund Bridge links the two cities by road and rail network.

Lookupfare has come up with some of the most enticing range of offers on flight deals to Copenhagen. Scroll through the various deals and offers and grab cheap flights to Copenhagen. Also, make sure to take a peek at our last minute flight offers.

Copenhagen’s roots lie in the 10th century where it was founded as a Viking Fishing Village. The beginning of the 15th century witnessed the Copenhagen being crowned as the capital city of Denmark. In early 17th century, the Danish capital carved its niche as a regional center of power with its armed forces, defenses and institutions. The city had to endure the devastating effects of fire and plague in the 18th century, and the city went through a phase of redevelopment.

Since the 21st century, Copenhagen has been a strong pillar of cultural and urban development, boosted by investments in infrastructure and institutions. The city is the political, economic and cultural center of the country. The city is home to the Copenhagen Stock Exchange and one of the leading financial centers of Europe. The economy has witnessed some major developments in the service sector, especially through its contributions in pharmaceuticals, information technology, and clean technology.

Copenhagen also ranks high in global surveys for its quality of life. Its well-developed economy along with its high levels of social safety and education services, the city gives a perfect reason to tourists from all over the world to make a flight booking to Copenhagen. On the other hand, it is also one of the most expensive cities in the world.

Nationalmuseet – Counted amongst the best museums of Europe, Nationalmuseet showcases wide spectrum of Denmark’s history, from the era of the Vikings to the Renaissance of the Danish, to the welfare state of the later part of the 20th century. The museum’s broad collection includes an array of artifacts and exhibits from Egyptian mummies, Danish pre-history and coins from ancient Rome and Greece. There is also a separate children’s museum offering fun and interactive exhibits. It is generally said that you need more than a day to explore the entire museum. The museum is open from Tuesday to Sunday from 10 am to 5 pm.

Tivoli Gardens – Opened in 1843, Tivoli Gardens is amongst the most popular theme parks in Europe featuring several theaters, restaurants, and dance halls. The park offers many attractions to the visitors of all ages that include a roller coaster ride and a variety of games, rides, and shows in Petzi’s world. There is also a beautiful Japanese garden, water fountains, an aquarium featuring a host of marine animals and much more. The gardens have also played host for many live dance performances and ballets including Pharrell Williams.

Strøget – Located in downtown Copenhagen, Strøget is the shopping hub of the city. It is one of the longest pedestrian streets in Europe and is lined with a wealth of boutiques, shops, and cafes. The street runs more than a kilometer long starting from City Hall Square to Kongens Nytorv. From budget-friendly retailers to high-end brands, the area is a promised land for the shoppers. You can find the biggest and International brands like Boss, Prada, Louis Vitton, Max Mara, Hermes, Mulberry towards the end of the street on the Kongens Nytorv side. On the other hand, budget brands like Zara, H&M, Weekday, Vero Moda can be found on the other end of the street towards City Hall Square.

The Little Mermaid – No trip to Copenhagen is said to be complete without a visit to the beautiful Little Mermaid statue. It was unveiled on 23 August, 1913 as a gift from the famous Danish brewer ‘Carl Jacobsen’ to the city of Copenhagen. Made of granite and bronze, the sculpture was inspired by a famous fairy tale of Hans Christian Andersen. As per the legend, there was a beautiful mermaid who sacrificed everything to unite with a young and handsome prince on land. Every day in the morning and evening, the mermaid swims from the bottom of the sea to the surface with the hopes of catching a glimpse of her beloved prince.

Rosenborg Castle – Located in the King’s Garden in the heart of the city, Rosenborg Castle features more than 4 centuries of majesty, crown jewels, royal art treasures and royal regalia. The castle was built in the 17th century by one of the most famous kings of Scandinavian, Christian IV. Today, the visitors can see the royal livings of that time, including the speaking tubs (what is regarded as the medieval version of intercoms), dining halls that hosted many royal suppers and the chamber where the king took his last breath in 1648. The castle is also home to one of the most spectacular collections of Flora Danica, one of the world’s most brilliant glass collections, both placed in tower chambers.

Find low-cost flights to Copenhagen with Lookupfare. Choose from a wide array of deals and pick your best travel offer.