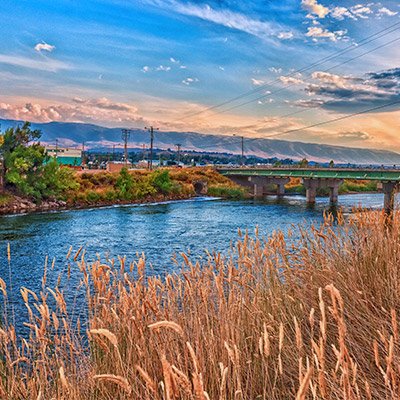 Perched at the base of the mighty Casper Mountains and snuggled in the North Platte River Valley, Casper is one of the most picturesque and peaceful American cities. A city that is less crowded and has friendly locals with easy wildlife spotting, should definitely be on your list when taking a tour in the West. Tourists can enjoy an afternoon bike ride around the trails of Casper Mountains, go fishing for brown ribbon trout in the North Platte River or simply take in the beautiful scenery of mountains rimming the city.  Casper is for those looking for an escape from the hectic and chaotic city life and looking to soak in the freshness of the nature. These reasons should be enough to entice you to book cheap flights to Casper to enjoy a relaxed vacation with your loved ones.

The second largest city in Wyoming, Casper is known as the ‘Oil city’ because of its booming oil reservoir.  The trails running across Casper were the only point of convergence in the mid-19th century between Oregon, California, Mormon and Pony Express Trails. The city was built on the east of the original site of Fort Caspar, which was the main region for migrants crossing through the North Platte River Valley while on their way to Oregon.  Several ferries rowed on this route offering passage across the North Platte River Valley during early 1840s. Book low-cost airline tickets to Casper and gather more information about the city and discover its rich history and old age culture.

National Historic Trails Interpretive Center:  This center provides hands-on, interactive exhibits that tell the historic tales of the migrants who crossed Oregon, California, Mormon and Pony Express Trails between 1840 and 1869.  The center takes visitors back into the old times through means of a 17 minute multimedia presentation at the beginning of the center tour that includes images, sounds and lights, recreating the picture of the lives of the pioneers who traveled these difficult and dreaded trails.  Also, take a virtual wagon ride crossing the North Platte River to take a glimpse of the difficulty encountered by the pioneers while migrating.

Nicolaysen Art Museum and Discovery Center:  This museum showcases contemporary art from the Rocky Mountains region as well as brings the cultural scenes alive for people of all ages. The center houses eight exhibition galleries where displays keep changing every 90 days along with a Children’s Discovery Center that allows children to express and hone their creative skills and abilities.

Fort Caspar: A reconstructed military establishment, at present a museum, was titled Fort Caspar honoring Lieutenant Caspar Collins, who lost his life battling at the war of Platte Bridge Station in 1865 against Lakota and Cheyenne. The museum houses the reconstructed building along with a stockade and a replication of Mormon ferry which functioned in Casper during 1847 to 1849.   The museum also has an interpretative center where one can take a walk through the history of Casper through the collection of objects, artifacts and interactive videos.

Independence Rock:  Around 150 years ago, when America was still in its infancy stage, there were emigrants who forged to the West crossing Central Wyoming in hopes of a brighter future. On their way, many halted at a rock formation about 50 miles southwest to Casper. As an evidence of their presence, they carved their names on the rock which today is popularly known as the Independence Rock. This place is a powerful reminder of the courage and sacrifices of the people who believed a brighter future awaited the fate of Americans. Independence Rock has now turned into a national historic landmark with visitors flocking this place in hordes.

Bishop House: Built in 1907, this house got listed into the National Register of Historic Places due to its association with the journey of Casper from a small town to becoming the oil city. Visitors coming to this place get a chance to learn about the history of Casper through the chronicles of the family who lived in this historically rich house for a span of almost 100 years. The house is also available on rent for varied purposes like small group gatherings and private parties.

Martins Cove: In the year 1856, Edward Martin along with a group of pioneers left Iowa for Salt Lake City. They were not rich enough to buy covered wagons or horses, thus they carried their belongings on handcarts. Here at Martins Cove, one can pull handcarts and walk through history.

Browse through the website, Lookupfare and book last minute flights to Casper. You can find our best flight deals on our website or cheap flights app.