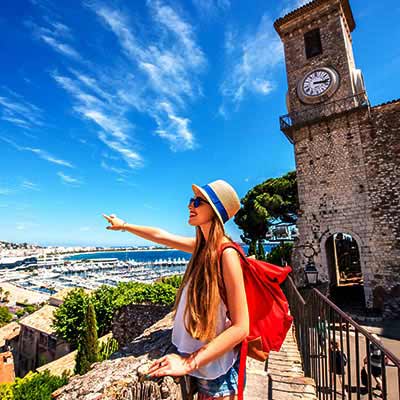 For years, you just sat in front of your TV sets and viewed the TV channel programs that were hosting and live recording international movie award shows and film festivals which were held for cinematographers, actors, producers, directors and everyone else connected with the cinema world in some way or the other. And you always thought to yourself, “One day, I will be there too, watching it all live instead of on TV”.

There are various segments and sections of these dreams. But there is one common dream of every movie buff out there.  If you are a fan of movies, you had always weaved a precious dream of taking the flights to Cannes at least once in your whole lifetime.

Cannes, the place which has crossed your mind more than once whenever somebody said the word “Red Carpet”, is one of the most beautiful places on earth. Situated by the French Riviera, Cannes is exotic with a touch of golden dusts of luxury.

Every year two occasions remind us about this beautiful place and our heart budges us to look for the flight deals to Cannes and fly away to the land of serenity, beauty, classic tales, a perfect blend of mountains and sea and a ‘not-to-be-missed’ luxury experience.

The 10th century Ligurian port Canua, now known as Cannes, has moved a long way from being a small port to the city which is often associated with luxury holiday destination. Set up by monks in 11th century, Cannes has witnessed it all, from reign of monks to the threat of Pirate loots or even threat of invasion by Spanish and British ruling bodies, Cannes has endured every possible change in the history of any city.

The name Cannes came from the former names Canua, which meant reed, which describes how wonderfully Cannes appears to have grown out of the sea like a reed plant, slender, and beautiful. So once you strike your flight deals to Cannes, you can look forward to walk in the streets of a small French city.

There are many interesting facts to know about Cannes, the small luxury city of France.

There is common belief all around the world which states that the cities situated besides sea is blessed with mild weather and climate conditions. The gorgeous city of Cannes abides by this belief and exhibits a Mediterranean Climate. As the city experiences a hot summer and only mild weather conditions around winter season, you should check the weather forecast of Cannes before getting on your flight to Cannes. As per the climate records, the average temperature of summer in Cannes is about 25 degree Celsius and the average temperature of winter in Cannes is about 10 degrees Celsius or below.

So you got your best flight deals to Cannes, or got lucky with last minute flights to Cannes offers. What will you do once you reach Cannes? Have you done your little research to find out the best places to explore in and around Cannes? Let us help you with your research and list out the places you might want to visit once you put your own feet on the grounds of city wrapped in luxurious wonders and nature’s beauty, Cannes.

When is the best time to book a flight to Cannes?

Every tourist destination around the world has a hike in flight price with the dawn of best season. If you are not aiming to attend the Cannes film festival which takes place around the month of May every year, we would suggest you to book your flights to Cannes for the months post May. The cheap flights to Cannes can be availed for the time period that falls in the best season period of Cannes. But often the cheap airline tickets to Cannes can be booked in case you have booked your tickets six months prior to your travel.

The busiest season for the tourism industry in Cannes extends from April to October, with May being the busiest of all as the city hosts the annual Cannes Film Festival in this month. If you are looking for amazing flight deals to Cannes, November to March is the best time to book a flight to Cannes. As the hot summer raising the popularity of Cannes beaches begin to subside, the mild days of Fall and winter gradually takes over Cannes and this is also the time you should look out for, in case you wish to take an on-budget trip to Cannes.

In case you are looking for cheap flights to Cannes from Sydney, you might search in the websites of airlines such as Air France, Cathay Pacific, Emirates, etc. Airlines like Emirates, Etihad Airways, and Air France operate flight between India to Nice which is the only flight route available to book for flights to Cannes. From Nice airport you can reach Cannes by flight to Cannes Mandelieu Airport (CEQ) [a private aviation airport] or by road which is 46 minute drive, or by train which is again 46 minute journey.

The primary choice of ways to opt for getting around within Cannes is:

The most famous event that has put Cannes in the center of the movie world is the Cannes film festival that takes place every year in the month of May. Other festivals are International games festival, International Dance festival, international Music Festival, and Cannes Shopping Festival. So pack your bags, book the low cost flights to Cannes and have the time of your life in Cannes!