The City of a Thousand Minarets 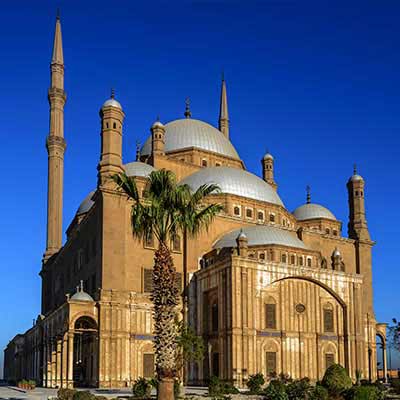 Set on a River Nile, Cairo is the sprawling capital of Egypt. Nicknamed “The City of a Thousand Minarets,” it is also the largest city in the country.

Associated with the Ancient Egypt, Cairo’s metropolitan area is the largest in the Arab world and Middle East, and the 15th largest in the world. The ancient city of Memphis and the Giza Pyramid Complex are located in its geographical terrain.

Cairo is the largest city of Egypt with a population of approximately 6.75 million residents spread over an area of 453 square kilometers. More than 10 million people reside in proximity to the city. Being a major city, Cairo also suffers from high levels of traffic and pollution.

Cairo’s metro network, one of the only two in Africa, is one of the fifteen busiest in the world with more than 1 billion passenger rides in a year. The economy of the country ranks amongst the most developed economies in the Middle East.

Cairo is home to the largest and oldest music and film industries in the Arab world. The city also houses ‘Al-Azhar’ University, the second oldest university in the world for higher learning. Headquarters of many International organizations, businesses and media houses is also located in the Cairo. For most of the time since its inception, Arab League has also had its headquarters in the city.

Cairo accounts for about 11% of the country’s population and 22% of the economy. Cairo also contributes the maximum to the city’s GDP. Most of the film production houses, media outlets and publishing houses are located in the city, as are half of the hospitals and universities in the country.

Cairo has also been ranked as the “world’s most 24-hour city.” In a study conducted by a leading social networking website, Cairo was placed above any other city in the world leaving behind the likes of major cities like London, Paris and New York. The study was based on the volume of time active on the internet during day and night. The city’s highly vibrant lifestyle is not only credited to the city’s young crowds in night clubs but also to the prominence of cafes which remain open even at night where people gather to smoke shisha.

Cairo is also amongst the few Muslim cities in the world with several casinos.

Great Pyramids of Giza – Located in the immediate proximity of the southwestern suburbs of the city, the pyramids of Giza are amongst the most iconic and mysterious wonders of the world. Been in existence for nearly 4,500 years, there are three primary pyramids in the area. First is the great pyramid of Khufu; it was named after the fourth pharaoh buried there. The second is the pyramid of Khafre, where Khufu’s son was entombed. The third is the Pyramid of Menkaure, which was built by Khafre’s successor of the throne and is also the smallest of all the pyramids. Given their historical appeal, the pyramids lure historical buffs from all across the globe to make a flight booking to Cairo.

The Egyptian Museum - Founded in 1857 by French Egyptologist August Mariette, Cairo’s Egyptian Museum boasts of some remarkable collection of antiquities and is counted amongst the greatest museums in the world. The museum was moved in 1897 to its present home in the distinctive powder pink mansion in downtown Cairo. The primary highlight of the museum is the Tutankhamun Galleries. All the artifacts exhibited were found in the tomb of Tutankhamun, successor, and son-in-law to Amenophis IV. The other prominent attractions include the Egyptian Jewellery collection and the Royal Mummies Collection.

Al-Azhar Mosque - Al-Azhar Mosque is dubbed as Cairo’s finest building from the Fatimid era. Built in AD 972, it is also one of the oldest surviving old mosques in the city. The Mosque was also bestowed with the status of university in AD 988 by Caliph El-Aziz, making it one of the oldest universities in the world. Located in the heart of Islamic Cairo district, Al-Azhar University today continues to be a leading theological center of the Islamic world. The main entrance to the Mosque is through the Gate of the Barbers. Once you enter the gate, you will find the central courtyard. Once in the courtyard, you can savor the spectacular views of the five minarets of the Mosque. There is also a Prayer Hall right across the courtyard.

Bab Zuweila – Bad Zuweila is considered to be the most interesting of all the Cairo’s district gates. Built in the 11th century, the gate has two minarets and is the last standing southern gate of the old town. You can climb to the top of the gate and savor the majestic rooftop views of the city. Once you enter, right next to the gate you will find red-and-white stonework of the Sheikh al-Mu'ayyad Mosque and just a few steps ahead, you will find the magnificent artisan stalls of the street of the tent crafters. On the stalls, you can also find the bright fabric that is used in weddings and other special occasions, being sold in bulk.

Al-Azhar Park – Opened in 2005, this scenic park provides a much-needed escape from the pollution and noise of the city. Stretching less than a mile in length, these lush gardens are designed along the traditional geometric Islamic lines and contain a children’s playground, waterways, fountains, palms, colorful stone works and an orchard. The park also features over 300 species of plants with proper labels. The park also offers some splendid views of the Mohammad Ali Mosque and the Citadel at its apex.

Grab low-cost flights to Cairo with Lookupfare. Have a look at our various travel deals and pick the best travel offers with the best of the services and amenities.