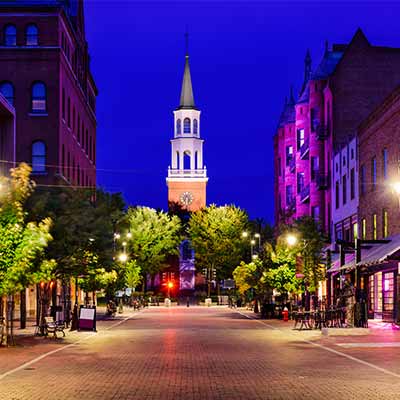 Nestled on the shore of Lake Champlain amid Adirondack and Green Mountains, Burlington is the largest city in the state of Vermont. Its relatively small size as compared to other metropolitan cities is one of its most alluring factors.

You can find the best cheap flights to Burlington on Lookupfare.  You may book airline tickets with us on our website or cheap flights app.

Burlington is cited as the most cosmopolitan city of Vermont. The city has an idyllic fusion of old New England flair, nature, arts and culture. It is regarded among the most beautiful cities in the state.

Burlington is a very vibrant, historic yet imaginative city. It has managed to preserve its old-town charm with a modern edge. The city has a very walkable downtown which is very popular among the locals and tourists alike. The city is home to ample number of parks and lively streets that are ideal for exploring the city’s dining, shopping and art scene. Gourmets will have a great time discovering the various farm-to-table restaurants, breweries and chocolatiers. The city also has a very vibrant nightlife.

Burlington is also a great outdoor city. Grab some low-cost airline tickets to Burlington and indulge in activities like picnicking, biking, swimming, kayaking, paddle boarding, fishing or simply relax on a beach. In winters, you can also enjoy activities like skiing and ice skating.

Shelburne Museum – Located on the outskirts of the city, Shelburne Museum is an open-air museum that collects original buildings from different periods of Vermont’s past. All the buildings are gathered in a campus and each of the houses, barns and shops are showcased with the furnishings and activities of its era of village life. All the buildings feature a great collection of folk art, decorative art, paintings and Americana. The museum doesn’t only houses collection by only American artists but also various French artists.

Cruises on Lake Champlain – Lake Champlain is stretched between New York and Vermont with a small part in Canada. Its width ranges from 0.5 to 12 miles and a major part of its waters is located in Vermont. You can enjoy sightseeing cruises and also learn about the Revolutionary War and other eras from the history of the river. The largest cruise ship of the river is about 140 feet long and boasts of a capacity of more than 360 passengers. Lunch and dinner cruises are also available.

Church Street Marketplace – Spanning across 4 blocks, Church Street Marketplace offers ample of action for its diminutive size.  The street is large enough to host large concentration of visitors on the occasions of many festivals and events year-round. There’s also enough space for restaurant and cafes on the pavement providing the ambience of an Italian piazza.

ECHO Lake Aquarium and Science Center – Perched on the shore of the lake, the ECHO Lake Aquarium and Science Center focuses on the historical heritage of the Lake Champlain area and the natural history of the area. The center provides a very hands-on experience to its visitors of all ages featuring interactive exhibits. Visitors can explore 15 species of frog from 6 continents and the geology of the Champlain Basin.

Robert Hull Fleming Museum of Art – Book cheap plane tickets to Burlington and unearth this great art museum. Located in the campus of the University of Vermont, the Robert Hull Fleming Museum of Art is home to over 20,000 pieces of artworks by American, European, African, Middle Eastern and Ancient Egyptian artists along with Vermont artists. There are over 400 pieces of Ancient Egyptian artworks that include a coffin and a mummy.

Ethan Allen Homestead – Spread across an area of 1,400 acres, Ethan Allen Homestead was residence to the Revolutionary War patriot, Ethan Allen. Ethan and his sibling, Ira owned the land as per the New Hampshire Grants. They had to fight hard to retain the ownership against the claims of New York. Later, both the states failed to prove their claims and the locals established the Republic of Vermont, which later transformed into a state. Thus, Allen garnered the reputation of a folk hero in Vermont.

Waterfront Park - Waterfront Park is one of the most scenic areas in the city. The area features a promenade and a bike path spreading to the northern and southern parts of the city reaching the foot of College Street. The park offers various recreational opportunities like walking, running, cycling and picnicking. The park also hosts various festivals throughout the year.

Choose from a wide range of Burlington flight deals. Book with us and enjoy the best offers on last minute flights to Burlington.