Media Capital of the World 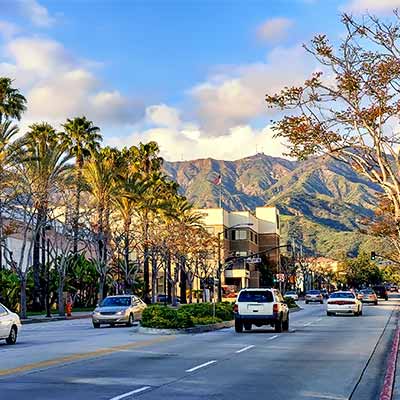 Burbank is dubbed as the “Media Capital of the World,” for a reason. The city is embellished with glitz and glamor because of its association with Hollywood. Take a stroll by the city’s streets and chance upon your favorite television taping, dine at upscale restaurants and shop at chic boutiques. So, if you are a movie fanatic waiting to catch a glimpse of your favorite stars, book cheap flights to Burbank, as the city offers a real slice of American cinema.

Located between the Verdugo Mountains and Griffith Park, Burbank got its name from a dentist “David Burbank,” who established a sheep ranch in 1867. It is regarded as one of the most perfectly walkable cities in the U.S. because of its tree-lined streets and eclectic boulevards. Although the city has a strong association with the movies, it ranks equally high in terms of shopping, dining, lush green parks and walking trails. This Californian city not only attracts visitors from the country but also from all over the world.

Magnolia Park – Known for its vintage shopping centers, this is where you’ll find old style movies and some mid-nineties apparels of your own choice. The area is famous for homes dating back to 1940s which were built for the veterans of World War II. Other features include multiple events which are held throughout the year boasting an active café culture. You can book low-cost flights to Burbank to discover these vibrant events.

Martial Arts History Museum – If you are enthusiastic about martial arts, have a karate kid at home or eagerly want to explore the history of martial arts, then Martial Arts History Museum is the perfect place for you. The museum was formed to encourage and educate young people and visitors about art, culture and tradition of Asia and its impact on Western World. It was designed by talented artists from DreamWorks and Walt Disney Studios. Other features of the museum include fascinating artifacts, information about film stars and beloved cartoons.

Burbank Farmer’s Market –Usually held in a small parking lot at the corner of Glenoaks Boulevard and Olive Avenue, the market has a friendly environment. One can find vendors out there hailing mostly from San Francisco and San Diego. The market also features restaurants, bakeries as well as representatives of various local business and community groups. This is also one of the oldest Farmers Markets in Southern California.

Flappers Comedy Club – A bone tickling avenue, the club is located in the beautiful downtown area, where it hosts comic gigs. Famed celebrities like Brad Garett, Greg Proops and Harland Williams have graced the venue. It was formed in 2008 with a purpose to provide people with a relaxed environment where they can laugh their wits out and enjoy workshops pertaining to comedy. Unlike any other club in town, here you can find multiple shows taking place in different rooms.

Studio Tours – As the city is home to many film and TV studios, seize the opportunity to experience the world that exists inside the walls of the studios. During the tour, you will chance upon many exciting backlots from popular movies including many fictional characters with the likes of Batman. One can even explore sets, costumes, scripts and props of various production houses.

Hyaena Gallery – If the grotesque, the dark and the scary intrigues you, then this is where you need to go. Along with horror-movie related artifacts, the museum displays rare things like art pieces created by serial killers. The Hyaena Gallery has won numerous awards like the Best Spooky Emporium and Best Darks Arts Gallery.

Colony Theater – A small local theater, this place draws the attention of every pedestrian that walks by. It has kept its 40 years of legacy alive by attracting local talents from the surrounding areas and by hosting top notch theatrical performances in a friendly atmosphere. The theater presents a regular schedule of special performances and plays by notable artists. However, this space can also be used for various film screenings, meetings and other special events.

The city is connected to the world by Bob Hope Airport which serves approx. 4.9 million passengers annually with over 70 flights taking wings daily. If you are looking for flights to Burbank, then Lookupfare is the best place where you can book cheap airline tickets to Burbank. You can also download our mobile app and browse through the best flight deals offered by our travel portal.