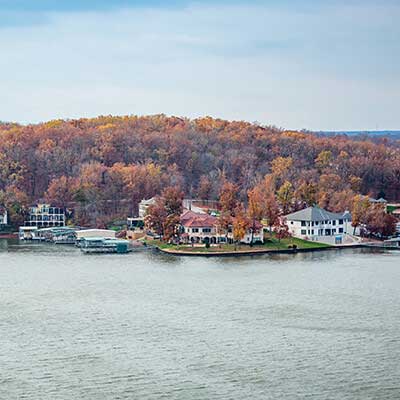 Tucked away in the Ozarks, with a population that still figures in the tens of thousands, Branson has all the trappings of a quaint, hill resort. Except, this little town is buzzing with a lively country music scene and boasts of being home to the legends Johnny Cash and Pat Boone, among others. With a warm, tight-knit community, the city - which draws its name from the erstwhile postmaster and grocer Rueben Branson - has plenty to keep travelers taking cheap flights to Branson, coming back for more.

There's a good reason why Branson has been nicknamed the 'Live Entertainment Capital of the World'. The city has more than fifty theatres, which host an assortment of country music, magic and comedy shows. Get off your last-minute flight to Branson and head right to the neon-lit '76 Strip, which has plenty of motels, shopping malls and even a wax museum or two! If the fresh mountain air and live music still don't have you convinced, here are a few more reasons to take last-minute flights to Branson.

Dolly Parton's Dixie Stampede - Arguably the most famous dinner theatre in Branson, Dolly Parton's Dixie Stampede features live horseback stunts, pyrotechnic displays and lively preshow performances, even as you gorge of a delicious four-course meal. Often hailed as being the most innovative live musical performance in the city's prolific lineup, this is one show you don't want to miss.

Hollywood Wax Museum - Branson is no Hollywood, but a trip to this museum may have you thinking otherwise. Get snapped besides stunning life-like wax figurines of Charles Chaplain or Johnny Depp, or shop for Hollywood-themed memorabilia at the gift store. This one is a great hit with movie-lovers and children.

Ripley's Believe It or Not - You'd be forgiven for thinking that this museum has been recently devoured by an earthquake, owing to the long, streaky fissures on its facade. The appearance has a definitive purpose, however, drawing inspiration from the legendary 1812 earthquake that supposedly caused the Mississippi to flow backwards. Inside the museum, be prepared for a touch of the extraordinary - from a two-headed taxidermied calf to shrunken heads, this museum is definitely not for the faint of heart.

Silver Dollar City - If you've bought the entire family cheap plane tickets to Branson, make sure to reserve some time for this child-friendly amusement park. With over 30 rides and attractions, which include the popular favorite Wildfire (which reaches speeds of up to 66 mph), the amusement park will keep the family enthralled for hours.

An Ozark holiday doesn't get any livelier than Branson, which is probably why this city is frequented by travelers seeking a restful yet entertaining holiday. If Branson sounds like the ideal holiday destination for you, make sure to check out the best Branson flight deals on Lookupfare's website or app. The easy layout and user-friendly design make booking cheap domestic flights and low cost flights to Branson simpler than ever before.