The Underdog City of Italy 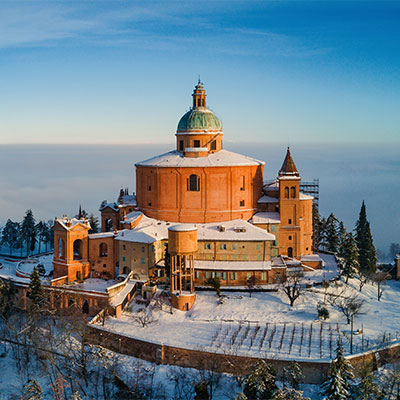 When you search for places to visit in Italy, gorgeous cities like Venice and Rome often top the list. After all, the beautiful canals and ancient Colosseum make these cities desirable. However, Bologna, a lively city in northern Italy is every bit spectacular to explore on your trip to this part of Europe. It has a number of historic sites where one can learn a great deal about the city. This city is known for its universities and century-old churches, the longest roofed arcade in the world and the tilted tower which are almost as famous as the Leaning Tower of Pisa. So, get on a flight to Bologna and have a dreamy Italian vacation.

If you visit any Italian city, you’ll find plazas that serve as the main cultural center. In Bologna, Piazza Maggiore and Piazza del Nettuno are exceptionally great places to spend some peaceful time. As you stroll along the historic buildings, you come across the magnificent 16th century Neptune Fountain built by a famous Flemish sculptor, Giambologna. What makes these plazas a great spot for you to visit and unwind is the fact that they are located near a popular shopping street called Via dell'Indipendenza. Many hotels line the area around these Piazzas. So, make hotel reservations in advance to wake up to the view of these gorgeous piazzas.

If you love delving into the art and culture scene of a destination, then you’d have a great time attending the festivals hosted in the city. From robots and chocolates to movies and comics, these festivals cater to the interests of one and all. A few you can check out on your Bologna trip - Biografilm Festival, Bologna Motor Show, BilBolBul, Irlanda in Festa, Human Rights Nights Film Festival, La Strada del Jazz, Arte Fiera, Il Cinema Ritrovato, Carnival, the feast of San Petronio, RoBOt festival, Cioccoshow and Gender Bender Festival.

The Archaeological Civic Museum of Bologna

For those of you who are curious about the bygone days, Museo Civico Archeologico or The Archaeological Civic Museum of Bologna is the perfect place. Here, at the museum, you can explore the exhibits which display a remarkable collection of antiques. Most of the items that the museum houses are from the prehistoric period and the Etruscan civilization. You can also find well-documented findings from the Roman civilizations, the Celtics, the Greeks and the Egyptians. Besides the impressive collection, the museum itself has a beautiful décor and feel to it as it is located inside the 15th century, Palazzo Galvani.

One of the mega structures in Bologna is the Basilica of St. Petronius and dominates one part of the Piazza Maggiore. Compared to the St. Peter's Church in Rome, this holy place is slightly smaller. It is said that this massive church was designed to dominate St. Peter's but it couldn’t surpass. If you walk inside the church, you will notice that the façade is incomplete. The church has a museum which houses the designs submitted for the façade. It also contains some of the work by Andrea Palladio, one of the best Italian architects. Book cheap flight tickets to the city and explore this spiritual place.

The Sanctuary of the Madonna di San Luca is a breathtaking attraction but it is a long walk to get there. However, the walk through the roofed arcade is worth every step. The first few hundred arches join the Porta Saragozza to Meloncello Arch. It is the longest arcade in the world which is around 2.3 miles long. One interesting fact about this arcade is that it contains 666 arches, a number that has its association with the devil. The number of arches is symbolic of Madonna defeating the Devil.

Anatomical Theatre of The Archiginnasio

It may be quite an unusual attraction to visit in Bologna but it has a strong history. The Anatomical Theatre of The Archiginnasio is located in the 11th-century University of Bologna and was used as a medical classroom where students learned anatomy by dissecting a corpse. The room still has everything intact, its grand interiors donned by wooden carvings. A wooden sculpture of a man which is carved in detail also decks the room. So, rent a car in Bologna, drive to this place and explore this intriguing attraction.

Bologna is an enchanting Italian city full of history. One medieval market you must visit while in the city is Quadrilatero. You can find everything here, right from authentic Bolognese delicacies to traditional clothing. The old market also has numerous structures with vintage architecture and are historically significant. So, book a low cost flight to Bologna and take a walk back in time.