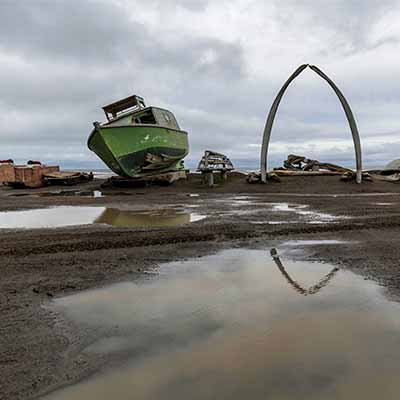 Barrow is the northernmost inhabited place in United States of America, lying 300 miles to the north of Artic circle. Perched on the confluence of Beaufort and Chukchi seas, it is one of the oldest cities in United States that dates back to the earliest human settlement in 500AD. With a population of nearly 4000 residents, this place is serene and beautiful. Once the sun sets in this city around the month of November, it doesn’t rises for 65 days. The city is home to Iñupiat Eskimo’s largely along with a cultural mix of American’s, Filipino, Hawaiian and the likes.

A culturally rich city, the residents still depend on traditional and primitive ways of hunting for their food requirements and survival. A place that is picturesque in every respect, delay not and book cheap flights to Barrow and enjoy a peaceful vacation.

Barrow is officially known as Utqiagvik, which means a place meant for gathering wild roots. The city gets the name from Point Barrow, which was titled so after Sir John Barrow of British Admiralty. The region enjoys a polar climate where winters are cold and longer in comparison to the summers where days are shorter but still cold. This place attracts people from all over the globe to experience a settlement very close to the Arctic Circle. So, book last minute flights to Barrow and enjoy the cold weather while immersing in this traditional and culturally rich Alaskan city.

Iñupiat Heritage Center: This place puts into display art and crafts, exhibits of whaling and a learning center for visitors to learn how to make the traditional artsy things that the locals craft. During the summers, there is always a local to entertain the visitors. The workshop allows people to see how the local builds boats and equipment for hunting and other requirements. There is also a space dedicated to dancers and storytellers to entertain people with their performances. The summer days are lively with dance and drumming performances, craft sale and gaming happening every afternoon.  It is one of the most happening and toured places in Barrow, with tourists enjoying themselves in the enrichment of the Iñupiat culture.  The center which is a museum, a living center as well as a gathering center, all summed up in one, opens up to the visitors from Monday to Friday, 8:30 am till 5 pm. So, look for last minute flights to Barrow and fly back into the land existing since time immemorial.

Point Barrow: This place is positioned 12 miles from Barrow, as one moves along the shore of the city. This land area has been labelled as the northernmost region of settlement in the United States of America which marks it as the tourist attraction. Point Barrow is one of those few named places from where one can enjoy the mystifying and wondrous Northern lights. During summers and springs, one can spot polar bears easily as this place is a den for them.

Funakoshi Memorial: A sculpture was built in a park near the Arctic Ocean in the year 2008 in the memory and honor of the dead pilot Shima Funakoshi and her mother Yoshiko Funakoshi. The plane crashed near the Barrow coast, killing them in that fatal accident. The sculpture is made in a beautiful parkland area that is frequented by tourists as they pay their homage to the bush pilot of Alaska.

Browse our website, Lookupfare and book cheap flights to experience the northernmost tip of the United States by checking up on domestic flight deals.