The Beautiful Little City of Maine 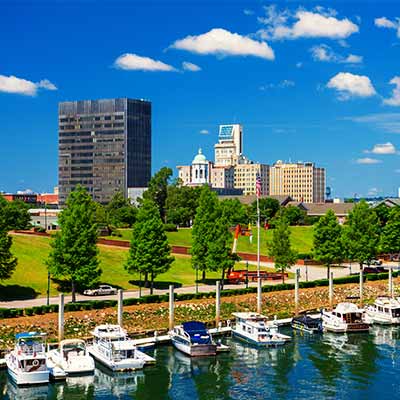 Capital city of Maine, Augusta was formerly a trading post that has now emerged as a thriving city. Historically and culturally rich, Augusta is a city that welcomes tourists with open arms. This city has a lot of popular attractions and means of entertainment for tourists to explore and indulge in. So, hop on a cheap flight to Augusta and explore this city.

Augusta is referred to as the easternmost state capital of United States of America which is located on the Kennebec River. The city has seen a long history of being inhabited by different races and tribes like American Indian, English and the French since the 16th century.  Augusta was accorded as the capital of Maine in 1827 and officially was named as a city in 1849. Since its inception, Augusta has served as a primary trading place, a shipping port, an avenue for publishing and manufacturing, and, recently, post-secondary education.

Maine State Museum:  The museum was established in 1830s as the first effort by any state to have a state museum. However, the museum disappeared in some time because there was no one to supervise it but the idea never deserted the governing body. Therefore, it sprang to life to be what it is today – one of the finest, state funded museum. Today, the museum is home to collectibles that account to over 500,000 exhibits comprising of tools, ceramics, furniture’s and images recounting the history of the state’s industrial growth.  The first thing to be preserved and displayed were the civil war flags along with rocks and minerals. So, book low-cost flights to Augusta and experience the historical significance of this city.

Old Fort Western:  This fort was built in 1750s and takes the visitors back into time as it is the oldest wooden fort that has braved time withstanding all season throughout these centuries. A designated National Historic Landmark, perched on the banks of Kennebec River, this fort has served as storage supply during American Revolution. With original barracks, store and various other replication of the original building, this fort is sure to take visitors on a ride through the past.

Kennebec River Rail Trail:  The city of Augusta is nestled on the banks of Kennebec River, which has served the Native American Indians and European inhabitants as a means of transportation and source of food dating back to the 17th century. However, the river was polluted over the years but with the introduction of the 1972, Clean Water Act, the river was preserved to its former, cleaner state. Today, the river has trails running along it that provide majestic views of the river to the visitors who often come here for hiking, biking and admiring the nature.

Holocaust and Human Rights Center of Maine: This place is dedicated to all those heroes who survived or rescued people who were held captive in the concentration camps during the World War II. This center puts into display photographs, artifacts, and firsthand account of stories of the survivors of the World War II.   At times, the center organizes seminars on educating people about medical ethics and diversity.

Pine Tree State Arboretum:  An area of 200 acres which is devoted to growing plants, shrubs and trees for recreational, educational and scientific purposes. This place educates natives about the importance of plants in the survival of human species and how it needs to be preserved for the coming generations. The place decked with so much greenery soothes the mind and aesthetically pleases the eyes of the visitors.

Maine State House: All the governing decisions of the state are carried out in this Hallowell granite building. Set on a hill top, this four- story building has a front center that rises up to 300 foot while the two wings facing east, each 75 foot.  The cornerstone for this building was laid in 1829 but was completed three years later. However, the old construction was demolished to furnish it with new architecture which was surmounted by a statue of the female figure of Wisdom plated in copper and gold.  The state house is the seating place of the Governor and all the major administrative authority.  It is open to public throughout the year to visit but the bookings need to be done in advance to ensure entry.

Login to Lookupfare website and scroll through the deals section to avail cheap airline tickets and the best domestic flight deals as you book last minute flights to Augusta.