For A Journey into the Locomotive Era 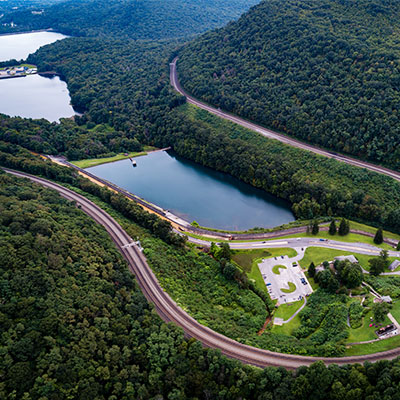 A historic railroad city, Altoona is a city in the Blair county of Pennsylvania in United States of America.  With its historic precedence in railroad and transportation, this city houses several popular tourist attractions that bespeak of its roots in railways and transit like the Railroaders Memorial Museum, Horseshoe Curve and the likes. The city derives its name from the Latin word altus meaning high, however it is popularly known as ‘The Mountain city’ in Blair county. With quaint and peaceful locales, this place offers recluse to those looking for a break from the populous metropolis life. So, book cheap flights to Altoona and experience the city of railroads.

Altoona was predominantly inhabited by the Native Americans of the Iroquois Confederacy originally. However, the first western settlers came to the city around mid-1700s. Altoona owes to Pennsylvania railroad for its origin and thriving growth.  While most of the cities were banked on the rivers back then, Altoona was located at the approach of Horseshoe curve, now regarded as a National Historic Landmark.  In mid 1800s, Pennsylvania Railroad was chartered by Pennsylvania, which led to the development of the community that is Altoona and has served as the staging area for the construction of various rail lines. A few years later, Altoona was incorporated as a borough with a resident population of approximately 2000. Altoona was later incorporated as a city with its recent counted population index making it the eleventh - most populous city in Pennsylvania according to the Census report of 2010.

Railroaders Memorial Museum:  A railroad museum in Altoona, dedicated to celebrate and acknowledge the contributions of the railroaders. An interactive museum that houses the collections and memorials of the long lost locomotive era.  This museum tells the historical relevance of the Pennsylvania rail roads and Altoona’s role in it through the medium of movies and exhibits. With well-constructed interiors and exteriors, this museums entices not only the rail buffs but also the novices. So, hop on a low-cost flight to Altoona and witness the history of the rail industry.

Horseshoe Curve:  An engineering marvel built in the 19th century, Horse shoe curve, a three rail road track, is one of the best tourist attractions in Altoona. Ride on the funicular, an inclined plane or walk the most beautifully landscaped 194 steps for a front seat view to admire the brilliantly executed engineering feat.  Watch the trains pass by at the same time on this beautifully designed rail road. Once there, make sure to check out the Visitors Center to see the descriptive displays and understand the work that went behind in constructing the historic landmark. So, hurry up and book last minute flights to Altoona and experience this enthralling place.

Lakemont Park:  This Park is home to the oldest surviving roller coaster in the world, known by the name Leap the dips. This roller coaster was added to the list of National Historic Landmarks by the National Park Service.  The park that began as a trolley park was later transformed into an amusement park.  It stands today as one of the oldest amusement parks in the United States of America. The park houses various kinds of rides for all ages.

Fort Roberdeau: A historic fort, situated in Tyrone Township outside of Altoona, is popularly known as The Lead Mine Fort. Constructed in 1770s during the period of American Revolution, Fort Roberdeau, stood to safeguard local lead mining activities from Tories and Native Americans. The fort is open to access for the public as a historic site.

Southern Alleghenies Museum: A community art museum founded in 1970s, maintains a permanent collection of approximately 4000 works of local, regional and international artists. It is a fascinating place to be at to admire the work of the various artists displaying their excellent talent.

Quaint Corner Children's Museum & Discovery Center: It is an interactive, children’s museum where children along with their families can enjoy together. A beautiful Victorian mansion, this place has rooms that are dedicated to hands on environment where children learn through a play medium. One can stay in the museum for a duration of an average 2 hours, however, one can even leave before that or stay for longer time during open hours.