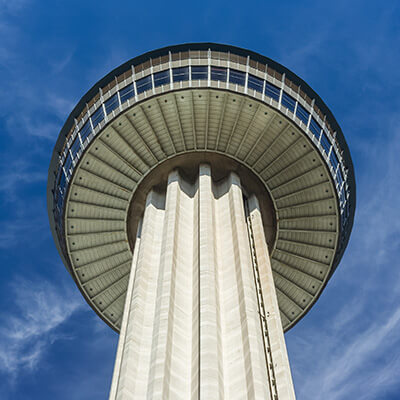 The city boasts of a vibrant nightlife with many bars, comedy clubs, live-music venues and nightclubs where you can go and unwind after an exciting day of sight-seeing. Drop-in at Ivory Lounge, Howl at the Moon, Ocho or Bar 1919 while you're there.

SeaWorld San Antonio- It is a marine-mammal-theme-park featuring roller-coasters, eateries, exhibits and regular shows. Its permanent residents include Dolphins, Belugas and Killer Whales.

San Antonio River walk- An area that runs along the banks of San Antonio River, it is a great place for you to stroll around at. Especially after sunset when the whole neighborhood comes alive with all the fairy-lights glittering off the surface of the water. There are numerous restaurants and cafes for you to have a few bites at.

Six Flags Fiesta Texas- Covering an area of 200 acres, it is a fun theme park with many thrilling rides like the Poltergeist, Scream and Pandemonium. Grab some cheap airline tickets to San Antonio for an exhilarating day of amusement and feasting.

Natural Bridge Caverns- Discovered in 1960, at present, it is the largest known commercial caverns in Texas. If you're into adventure, score some cheap plane tickets to San Antonio and go for the Hidden Passages Adventure Tour or Discovery Adventure Tour in the premises of this natural wonder.

Other popular cities to Visit

While looking for San Antonio flight deals, one of the challenges you might face is finding the kind of air seats you want to travel in. This is where our travel portal comes in. Lookupfare provides you with the option of choosing from a wide variety of low cost flight to San Antonio. Our well-structured deals make sure that your specific travel requirements are met. Browse our website or app to find cheap domestic flights, last minute fights or one way flight deals to San Antonio among a host of others.