From Chicago to Los Angeles
flights from
New York to Rostov On Don
Super Saver
$577.37
Home Flights Rostov On Don 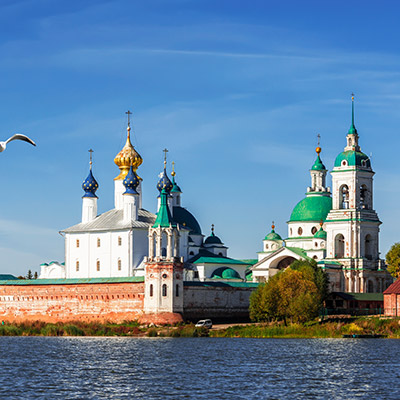 Bestowed with a stunning backdrop of the Don River, Rostov-on-Don makes for a perfect destination for a laidback vacation. Travelers visit the city with near and dear ones to spend a few days in its serene ambience, amidst some lush greenery. Get onboard a last minute flight to Rostov and experience the true allure of Southern Russia.

Colloquially referred to as just Rostov, the city has been dubbed as the most cosmopolitan place in South Russia. It may be amongst the lesser-explored destinations in the country but it manages to catch the fancy of thousands of travelers each year.

Despite being deeply immersed in history, this picturesque city comes across as young and vibrant. Stroll around and you’ll come across streets with names like Lucky, Creative and Harmonious. Thanks to River Don, Rostov is blessed with some stunning and tranquil beaches that offer just the ideal escape from the monotony of daily life.

Book a low-cost flight, fly to Rostov and discover its rich historical and cultural legacy. The city boasts a large number of historical points of interest, of which mostly are monuments and memorial complexes. Rostov is also acknowledged for its notable Cossack culture and peasant revolutions. The city traces its roots to mid-18th century when a decree signed by Queen Elizaveta Petrovna formed the Temernitskaya Customs House.

Rostov-on-Don Embankment – Spanning over a mile across the Beregovaya Street, Rostov-on-Don Embankment is considered to be the most popular promenade in the city. The area is always packed with locals and tourists hanging out with their loved ones. Art lovers may go for the river cruise to discover local art and monuments. The area has been renovated over the past few years offering a host of facilities like Wi-Fi spots and cellphone charging points.

Pushkin Street – Dotted with statues, memorials, benches, food stalls, restaurants and trees, Pushkin Street is close to both the October Revolution Park and City Park. Dubbed as the largest boulevard in the city, it offers a bevy of activities to indulge in. In fact, no trip to Rostov is thought to be complete without a visit to this site. You can easily find a number of hotels in Rostov-on-Don in proximity to this area.

Cathedral of the Nativity of the Blessed Virgin – Nestled in the Cathedral Square, Cathedral of the Nativity of the Blessed Virgin is an iconic landmark and a prominent architectural attraction in the city. Ever since the birth of the city, the site has always been home to a church. The first three didn’t last long and the present one was erected in the year 1860. Around mid-20th century, during the Soviet era, the cathedral was majorly ruined. A few years later, the gates were reopened to the public, under the trying times of the German rule. Post the Second World War, a complete restoration process was undertaken on the cathedral and the Bell Tower was brought back to its full glory in 1999 in the commemoration of the 250th anniversary of the city.

Left Bank – The major part of the city is located on the right side of the Don River, with left bank often referred to as less developed. A few years back, however, things changed in favor of the left bank. It has now become a popular recreational area offering a host of nightclubs, barbecue joints, restaurants, cafes and beaches along with several other entertainment options and a few industrial sites. But, the local authorities believe that the construction of a new soccer stadium on the bank is going to further the development in this area.

The Rostov Academic Drama Theater of Gorky – Rent a car and head straight to this theatre which is named after Maxim Gorky to catch some great concerts, comedy shows and plays. Situated on the east side of Bolshaya Sadovaya Street, the venue happens to be the only performing arts center in the city to operate in the summer season.

Rostov Zoo – If you’re exploring the city with your kids, then this is a must visit site for you. Counted amongst the largest zoological centers in the nation, it shelters a wide variety of wild creatures such as tigers, reptiles, falcons, polar bears, camels and giraffes.

Foodies are in for some treat in this Russian city. Book cheap flights to Rostov-on-Don and head to any of its world-class restaurants to sample some authentic Southern Russian flavors.