The City of Brazilians 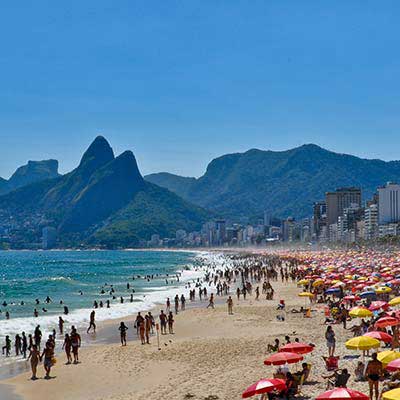 Luscious beaches, sprawling towns and stunning attractions are some of the primary traits of the capital city of the state of Rio de Janeiro, Rio de Janeiro.

Famous for its Ipanema and Copacabana beaches, Rio de Janeiro is a large seaside municipality in Brazil and the capital of the state of Rio de Janeiro. With an estimated population of near about 6.6 million residents, it is the second most populous city in Brazil and the sixth most populous in the Americas. A portion of the city has been designated as a World Heritage Site by UNESCO as a cultural landscape.

Famed for its natural setting, Rio de Janeiro is one of the top tourist destinations in the Southern Hemisphere. The biggest draws of the city are its Bossa Nova, Carnival, Samba and Balneario beaches such as Ipanema, Copacabana, Leblon and Barra de Tijuca.

The city is classified into 33 administrative regions.

Rio de Janeiro boasts of the second largest GDP in the country, with an estimated figure of approximately US$201 billion. The service sector contributes the major portion of the GDP at nearly 66%, followed by Commerce at about 23%, industrial activities at about 11% and agriculture at just about 1%. It is home to the headquarters of several telecommunications, mining and Brazilian Oil companies, including two of the major industrial corporations of the country – Vale and Petrobras and the largest Telemedia Company, Grupo Globo.

Rio de Janeiro also played hosts to the 2016 Summer Olympics and the 2016 Summer Paralympics, making it the first city in South America to do so. It also became the first Portuguese-speaking city in the world to host the esteemed event.

A football fanatic nation, the Maracanã Stadium hosted the finals of 1950 and 2014 FIFA world cups, FIFA Confederations Cup 2013 and the 15th Pan American Games. With 5 World Cup triumphs, Brazil holds the world record for holding the prestige trophy the maximum number of times. Some of the greatest footballers to grace the famous yellow jersey include the likes of Pele, Ronaldo, Ronaldinho, Romario, Neymar, etc.

Christ the Redeemer (Cristo Redentor) - Sitting atop 200 feet high at the Corcovado peak with arms outstretched and appreciating the serene views of Rio, this iconic statue of Christ is perhaps the most iconic tourist landmark in the city. Built in the late 1920s, the construction of the statue was financed almost entirely by the Brazilian Catholics. The statue is constructed of reinforced concrete and soapstone and measures approximately 100 feet tall with arms stretching 90 feet wide. Dubbed as a must-see point, a visit to this statue is arguably the best way compliment your flight booking to Rio de Janeiro.

Sugar Loaf – Towering at a height of more than 1200 feet above the harbor, Sugar Loaf is one of the most prominent points of interest in the city. To reach the summit, you would first need to hop on a cable car to reach the peak of the neighboring Urca Mountain, which also offers the visitors some of the most stunning views of Copacabana and Cristo Redentor. Once you make it to the Urca, you will need to hop onto another cable car climbing to Sugarloaf. Once you reach the top, you will find some spectacular scenery alongside numerous restaurants and shops.

Ipanema – The 60s people might remember the famous Bossa Nova song “The Girl from Ipanema.” The song made the beach famous and today it is one of the most popular tourist attractions in the city. Counted amongst the best beaches in the world, the beach is surrounded by many cafes, restaurants, and shops alongside a variety of clubs, theaters, and art galleries. Located in the uptown “Zona Sul” or South Zone, Ipanema is located between the beaches of Leblon and Copacabana. The different sections of the beach are marked as “postos” or posts and each of the areas are preferred by different types of people.

Jardim Botânico - The Rio de Janeiro Botanical Garden, or commonly referred to as Jardim Botanico, is home to more than 8,000 species of flora. Located west of Lagoa Neighborhood, it features numerous mature specimens, including avenues of the tall palm trees. The biggest draw of the garden is the 600 species of orchids.  There are also many monuments and fountains which includes a Japanese garden, a pond full of water lilies and a museum that exhibits related to the environment. Spanning across 340 acres, early in the mornings, many monkeys and occasionally toucan could also be spotted savoring the tranquil oasis.

Maracanã Football Stadium – Like the most parts of the world, soccer is referred to as football in Brazil. Football is no less than a religion in the country and footballers hold the stature of gods. The Maracana football stadium is considered a temple. The official name of this iconic stadium is Mario Filho, named in the honor of a Carioca journalist, who stood out in the building of the stadium. The football enthusiasts will certainly have a great time visiting this football Mecca and exploring the museum which contains many uniforms, trophies, and photos of the greatest footballers of Brazil.

Find the best low-cost flights to Rio de Janeiro alongside many last minute flight offers with Lookupfare and make your trip to this Brazilian city cherishing. Go through our numerous online flight booking options and present yourself with some of the best Brazilian memories.