Things to Do in Venice

One of the most beautiful cities on the planet, Venice, comprises of 118 little islands that are separated by the waterways. This dreamy islands are connected by bridges. The city is known for its artistic movements, the Renaissance period in particularly. It has played an important part in the historical background of symphonic and operatic music. Venice is a popular destination that has been delighting travelers since ages. Today, there are various attractions in Venice. Its gorgeous landscapes, gondolas and the play of light and colors make Venice a paradise for visitors. The city has a large number of attractions; we made a list of things to do in Venice so that you get the most out of your vacation.

St Mark’s Basilica: A Roman Catholic Church, known for its Italo-Byzantine architecture, is one of the most well-known Churches in the city. St Mark's Basilica lies at the eastern end of the Piazza San Marco, neighboring Doge's Palace. Initially, it was built as the chapel of the Doge, and has been the city's congregation place since 1807. Similarly as with many houses of worship in Italy, you should be appropriately dressed to be allowed to enter its premises. No short skirts or exposed shoulders are allowed.

Grand Canal: Water buses and private water taxis are the transports available making it convenient for visitors to explore the canal. Grand Canyon forms the major water-traffic corridors in the city. On the first Sunday of September, Historical Regatta – a boat race — takes place. The event attracts thousands of spectators watching from the banks of the canal. On November 21st, people of Venice express their gratitude to Virgin Mary for saving them from the plague epidemic at a Santa Maria Della Salute. People assemble on a temporary floating bridge and enjoy traditional dishes. Take a cheap flight to Venice and join-in on the festivities of this amazing event.

Cathedral of Santa Maria Assunta: Situated in the beautiful Torcello Island, the Cathedral of Santa Maria Assunta is a great example of Venetian-Byzantine architecture. It is famous for its gorgeous mosaics which are indeed real masterpieces of the Byzantine-Ravennate school style. The cathedral houses a number of historical and artistic treasures. 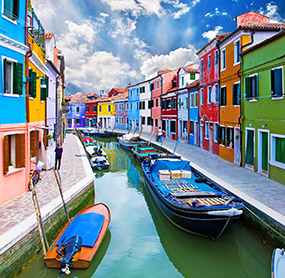 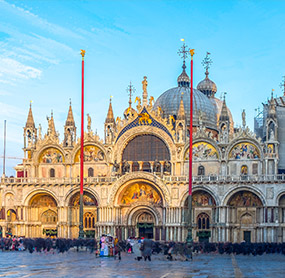 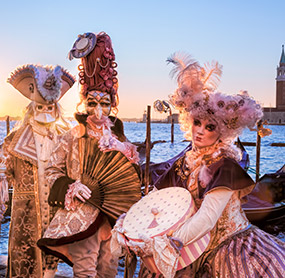 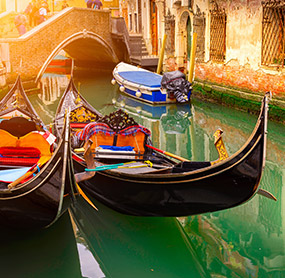 Correr Museum: Founded in 1830, the Correr Museum’s collection portrays the rich art and History of Venice. One of its most popular exhibits is the one that displays giant globes to the delight of both — kids and adults. There’s also a beautiful café at the museum where you can spend a few relaxing moments sipping on your favorite hot beverages.

San Simeone Piccolo: One of the last churches to be built in Venice, San Simeone Piccolo, is located on the other side of the Grand Canal, in front of Santa Lucia Train Station. It is also famous for its dome because it is used to make the Church look taller than it is.

Doge’s Palace: One of the main attractions in northern Italy, the Doge’s Palace, was the house of the Doge of Venice, the supreme authority of the former Republic of Venice. It was built in Venetian Gothic style and today, it is one of the 11 museums run by the Fondazione Musei Civici di Venezia. The Palace remains closed on December 25th and January 1st.

Fortuny Museum: Also known as Palazzo Pesaro degli Orfei, Fortuny Museum is an art museum located in the neighborhood of San Marco. Palazzo Fortuny is counted among one of the biggest palaces in Venice. Its collections include 150 paintings by Mariano Fortuny, selection of fabrics, prints, clothes, and historical images. This fascinating museum needs to be included in your things to do in Venice list.

Ca’ d’Ora: A palace situated on the Grand Canal, is one of the oldest palaces in the city and is called a ‘golden house’ because of the golden and polychrome outside decorations which once graced its walls. The palace was built between 1428 and 1430 by the architects Giovanni Bon and his son Bartolomeo Bon.

Murano Glass Museum: A museum that provides info about the history of glass, Murano Glass Museum was founded in 1861. It is located on the island of Murano, situated north of Venice. The museum’s collection range from antiquity to 20th-century works by the renowned Barovier & Toso glass company and glass textiles created by Carlo Scarpa. Hop-on a last minute flight to visit this beautiful museum.

Carnival of Venice: The Carnival of Venice dates back to the year 1162, when celebrations were organized to celebrate the victory of the "Serenissima Repubblica" against the Patriarch of Aquileia — Ulrico di Treven. This carnival is widely popular owing to the fact that all its participants wear glitzy masks along with exquisite costumes. Attending this grand affair is one of the coolest things to do in Venice.