Things to Do in Washington

Washington D.C., commonly referred to as ‘Washington’ or only ‘D.C.’, is the capital of the United States of America. The city is filled with a large number of attractions that include galleries, museums, memorials, parks, iconic monuments and much more. Washington D.C. is pretty popular among tourists as it is the home city of three different components of the federal government of the US — the President, the Supreme Court and the Congress. Washington D.C. is one of the most visited places in the country. If you’re planning a visit to this historic city, then here are the spots to be put in your things to do in Washington D.C. list-

National Mall: A national park located in downtown Washington D.C., the National Mall contains a few museums and memorials; and receives approximately 20 million visitors each year. The spot also serves as an outdoor recreational area for activities such as jogging and picnicking. Many annual events are held at this amazing spot, among which the Blossom Kite Festival is pretty popular. This beautiful festival is hosted at the last weekend of March.

National Gallery of Art: Established in 1937, the museum was founded with the vision that art is for everyone and the masses of the country should be able to enjoy art without worrying about their budget. This is the reason that visitors are allowed to enter the museum without any entry-fee. Its core collection includes significant works of art donated by Paul Mellon, Rosenwald, Chester Dale and a few other philanthropists. European and American paintings, photographs, drawing and sculptures are displayed in the galleries and sculpture garden. The National Gallery of Art has one of the finest art collections in the world.

John F. Kennedy Center for the Performing Arts: Opened on 8th September, 1971, this performing arts center is located on the Potomac River. The center is one of the busiest performing arts facilities in the country. Almost 2,000 performances are held annually that are attended by about two million people. The Kennedy Center has three main theaters i.e. the Concert Hall, the Opera House, and the Eisenhower Theater. 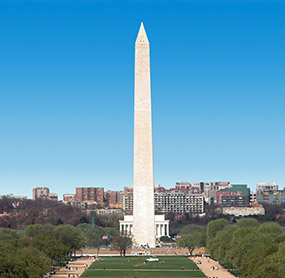 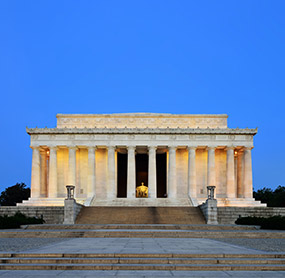 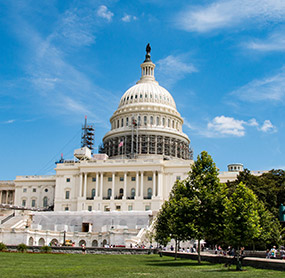 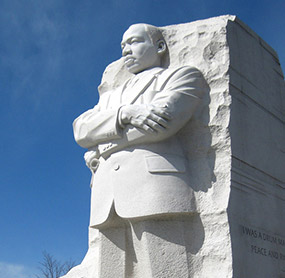 United States Capitol: The United States Capitol is located on Capitol Hill. The construction of the original structure was completed in 1800. After that, it was expanded with the addition of the massive dome, extra chambers in the north wing and south wing for the Senate and the House of Representatives, respectively. Annual events such as 4th of July and the National Memorial Day Concert are also held at this site. Book cheap airline tickets to Washington D.C. and explore the best part of the city.

Lincoln Memorial: An American national monument, the Lincoln Memorial is located on the western end of the National Mall. It has always been a major tourist attraction and a symbolic center that puts its emphasis on equality amongst people of different races. It is open to public 24 hours a day. Since 2010, the memorial has seen the footfalls of about 6 million visitors.

National World War II Memorial: This beautiful memorial dedicated to the Americans who served in the armed forces and as civilians during World War II, is located between the Lincoln Memorial and the Washington Monument. It consists of 56 granite pillars and a fountain that adds to the beauty to this place. The monument, inaugurated on April 29, 2004, was dedicated by President George W. Bush on May 29, 2004. Approx. A visit this memorial is a great way to pay your respects to the martyrs and hence, needs to be included in your things to do in Washington D.C.

White House: The White House, built between the years of 1792 and 1800, have been beautifully designed by the incredibly talented architect James Hoban. The House is a National Heritage Site maintained and owned by the National Park Service. It is also a part of the President’s Park. In 2007, it was listed second on the ‘America’s Favorite Architecture’ list by the American Institute of Architects. Grab a few low-cost airline tickets to Washington D.C. and explore the architecture of the place where the President of the United States resides.

Ronald Reagan Building and International Trade Center: The first federal building in Washington D.C., it was designed keeping in mind that the structure was going to be used for both — governmental and private sector purposes. It has been named after former United Sates President, Ronald Reagan. The building is used as a venue for numerous events such as conferences, trade shows, outdoor concerts, etc. Among the important government organizations located in the building are the U.S. Customs and Border Protection and U.S. Agency for International Development.

National Air and Space Museum: The most awesome thing about the National Air and Space Museum is that it is home to the largest collection of historic aircrafts and spacecraft on the planet. Some of the most popular attractions of this intriguing museum includes the original 1903 Wright Flyer, Apollo 11, Lockheed U-2 along with many others. The museum also features many temporary and permanent historical exhibits of science and technology. Some of the other attractions include IMAX Theater and Albert Einstein Planetarium. Visiting this stunning museum is one of the coolest things to do in Washington D.C.