Things to Do in San Antonio

Texas’s third-largest city, San Antonio is a popular tourist hub that serves as the focal point for three distinct geographic terrains – ‘The Hill Country’, ‘The prairie’ and the ‘Plains of South Texas’. The city is a bustling cultural hub and has a bevy of tourist-friendly art and historical museums, in addition to several amusement parks, and interesting dining options. The city is also home to the site of the famous ‘Battle of Alamo’, a mission that doubled up as a fort during the Texan Revolution. The city has a deep Spanish and Mexican heritage, which is especially apparent during the annual ‘Fiesta Week’ event. The city is also well-loved for its small-town, laid-back appeal and its year-round pleasant weather. Before you plan your next trip to this quaint, touristy city, make sure to first check out our list of the best things to do in San Antonio.

The ‘San Antonio River Walk’ is a scenic network of walkways that extend along the San Antonio River. These walkways are located one-storey below the city’s streets and are flanked by numerous bars, shops and restaurants. The European-themed river walk connects to several prominent downtown buildings, which have special entrances for ease of access. It was recently expanded to include a ‘Museum Reach’ that connects prominent cultural attractions and the ‘Mission Walk’ that lets visitors explore the UNESCO World Heritage Spanish missions. Head to the river walk for a leisurely stroll, some casual dining, or to simply watch the world go by from the stone footbridges that extend across the river. For a more intensive experience, you can hop onto ‘Rio San Antonio River Cruise’. One of San Antonio’s most memorable tourist attractions, a visit to the River Walk is definitely one of the most interesting things to do in San Antonio. 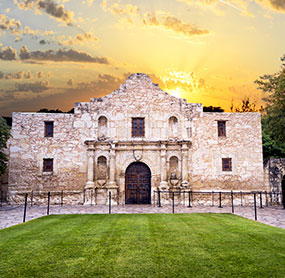 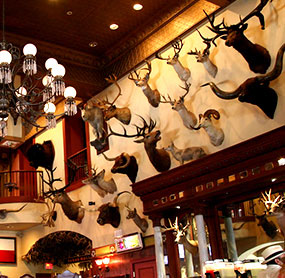 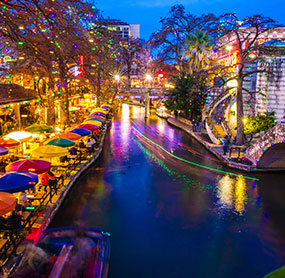 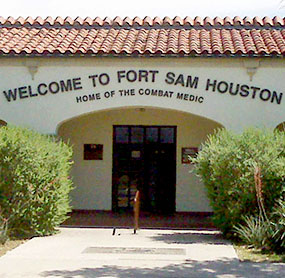 San Antonio's most definitive historic attraction is the Alamo, the site of the historic Texas Revolution battle that saw only about a hundred Texans bravely defend their state from Mexican invaders. The Alamo Mission was an 18th Century Roman Catholic establishment and one of the earliest Spanish missions in Texas. The Alamo was used as a fortress during the legendary battle, and currently serves as an interpretative museum where visitors can relive memories of Texasâ??s revolutionary past. It receives more than four million visitors every year, who tour the chapel and the small museum that has revolution-era paintings, weapons and artifacts. A visit to the Alamo is definitely one of the best things to do in San Antonio.

The locals refer to this army post as 'Fort Sam', and consider it one of San Antonio's most pertinent historic sites. Fort Sam Houston is named after the first President of the Republic of Texas - Sam Houston, and was the location of the countryâ??s first military flight. The fort also held the Apache war chief - Geronimo and his warriors for 40 days. Interestingly, Dwight D. Eisenhower was posted twice to the fort, and also met and married Mamie Doud here. He was the first of many soldiers to find their future wives at Fort Sam Houston, giving rise to the fortâ??s nickname of 'Mother-in-law of the Army'. The fort is a National Historic Landmark and has several historic buildings. The oldest of these is the Quadrangle, which was built in 1876, which is now home to deer, rabbits and ducks. The US Army Medical Department Museum has an extensive collection of army medical gear from various countries, including Germany, Vietnam and China, as well as Civil War surgical equipment.

The Buckhorn Saloon and Museum was originally set up to display Albert Friedrich's collection of horns. To grow his budding collection, Albert would offer anyone a free drink in exchange for a pair of deer antlers. The saloon was also favored by Theodore Roosevelt and the 'Rough Riders'. Although the Lone Star Brewery, where the collection was originally stored, sold it off in 1977, the current-day museum still has a wide assortment of 'Lone Star Brewery' memorabilia. The Buckhorn museum has 520 species of mounted wildlife from around the world, including fish, birds and mammals. The Texas Ranger Museum displays authentic artifacts including guns, badges and photographs, as well as the meticulously recreated 'Ranger Town' that depicts San Antonio of the yesteryears. Also expect to find Native American and cowboy memorabilia, in addition to intriguing rattlesnake art.

If you're planning a trip to this whimsical, historic city, look no further than Lookupfare's OTA. Browse through the best cheap flights to San Antonio and sort through the best hotel deals in the city - you'll be delighted to find just how relaxed, enjoyable and fuss-free your holiday planning can be.