Things to Do in Portland

Portland is Oregon’s largest city and one of the largest in the Pacific North-west. And yet, the city is best loved for its laidback vibe that is a stark contrast to that of its more hectic neighbors – San Francisco and Seattle. Portland is one of America’s most popular tourist destinations owing to its scenic locales, excellent outdoor experiences, and excellent food and beer outlets. The city experiences ample rain in the spring, winter and fall months, so make sure you are well equipped while packing for your Portland getaway. If possible, plan your visit during the June-late September period, when the city experiences its brief, sunny summer. Also make sure to take a look at our list of the best things to do in Portland, in order to make the most of your stay.

Located on the banks of the Willamette River, the park is named after the former Oregon governor- Tom McCall, who undertook numerous measures to beautify the western-bank of the river. The park is named as one of America’s ‘Ten greatest public spaces’, and is a popular site for jogging, biking, skateboarding and basketball. The park also hosts several prominent festivals, including the ‘Waterfront Blues Festival’, the ‘Oregon Brewers Festival’ and the ‘Bite of Oregon Festival’. Besides these, the park serves as the venue for several rose-themed events, which have inspired Portland’s moniker of being the ‘City of Roses’. While here, expect to see many Portland landmarks, including the ‘Battleship Oregon Memorial’ that honors the USS Oregon, The ‘Founders’ Stone’ that marks the memorable naming of the city – founders William Pettygrove and Asa Lovejoy who had tossed a coin to determine the city’s name – and the ‘Japanese American Historical Plaza’ that is dedicated to the Japanese immigrants and is bordered by numerous ornamental cherry trees. A day spent at the park is one of the best things to do in Portland if you’re the kind who loves the great outdoors. 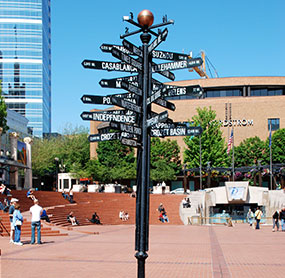 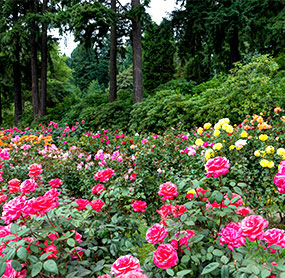 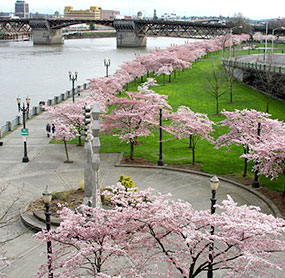 A brick-plaza that is often referred to as 'Portland’s Living Room', The Pioneer Courthouse Sqaure is a public space named after the 1857 Pioneer Courthouse. This innovative space occupies an area of 40,000 sq. ft. and has several artistic features including huge, toppled columns that are topped with public chess-tables, and the amphitheater-like arrangement at the center of the square which is often used for musical performances. The square also has several noteworthy pieces of public art, including Seward Johnson's famous 'Allow Me' sculpture, which is referred to by locals as "The Umbrella Man". The "Weather Machine" is another Portland landmark and is a 33 ft.-tall metal column that announces the following day's weather at noon each day with a theatrical flourish - the orb at the top of the column opens to reveal a symbol denoting whether the following day will be clear, overcast or stormy!

A relatively untamed park that occupies 5,100 acres of forest cover, The Forest Park is one of the most scenic public spaces in the city. The Forest Park is also the largest wooded urban-park in the country and overlooks the scenic Willamette River. Explore the park's 70 miles of walking and hiking trails, and experience the scenic beauty that the city is so famous for - 'The Wildwood Trail' which is the park's longest and most popular trail. Expect to meet northern flying squirrels, bobcats, coyotes, Roosevelt elks and great horned owls, among many other animals that one can witness here.

Another major reason for Portland's nickname, the 'International Rose Test Garden' has over 7,000 rose plants. The park is at its peak beauty in the months of April through October, when most of the roses are in bloom. Many of the park's species come from different parts of the world - they are tested for various properties including their color and fragrance at the garden. This garden is the oldest, continuously operating rose test-garden in the country. The park's reputation also makes Portland the only American city that is able to issue awards to roses from all over the world.

A train leads visitors from the ‘Rose Test Garden’ to the much-famous 'Oregon Zoo', which is one of Oregon's most popular tourist attractions. The zoo was set up in the year 1888 and is currently home to an extensive collection of animals - including 21 rare and endangered species, as well as a comprehensive selection of plants. The zoo comprises of several themed exhibit areas that are modeled after their inhabitants' natural habitats. Expect to see an 'African rainforest', 'African Savanna', 'Serengeti enclosure', an Amazonian flooded forest and the 'Great Northwest', among many others. The zoo also hosts a very popular series of concerts in summer, while winter months see the zoo premises transform into a winter wonderland with the 'Zoo-Lights' holiday light show.

If you're planning a trip to this picturesque city, look no further than Lookupfare's OTA. Browse through the best cheap flights to Portland and sort through the best hotel deals in the city - you'll be delighted to find just how relaxed, enjoyable and fuss-free your holiday planning can be.